So, NASA and the other group of lunatics contend this year’s Jan – April is the hottest ever!  Indeed, here’s a quasi-famous lunatic blog heralding such stupidity ……

Yeh, it’s funny how the lunatics only note records they wish to note …  Here’s some records of some empirical data … our North Hemisphere snow extent …..

Well, that’s strange!!!  Over the last 30 years I can see where there’s been less snow on the ground in the North Hemisphere at least 11 years!!!  Weird!!!  Well, the hot is probably focused on the Southern Hemisphere …..right? 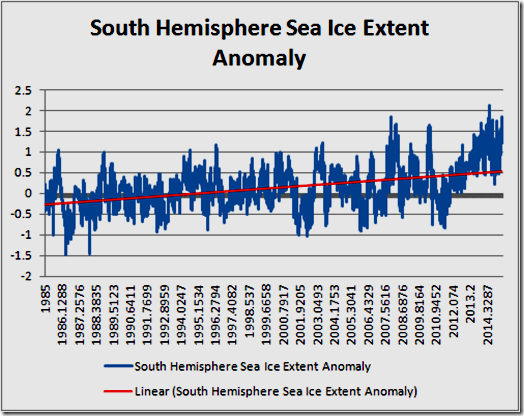 Apparently, more snow on the ground and more ice in the sea is a symptom of a warmer planet.

Source for snow graph source for the ice graph.

At this point, no one with a viable brain can possibley believe the last four months have been the “hottest ever”.