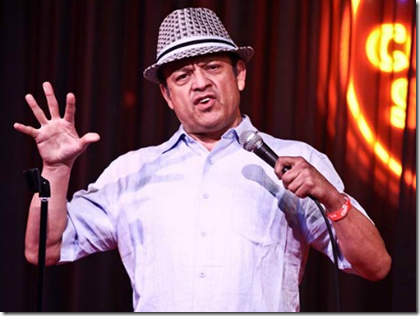 So, I’ve read this at Breitbart …

Comedian Paul Rodriguez says he isn’t against fish or the environment. But the veteran comic has had enough of environmentalists who push their pet causes to the detriment of the working man and woman.

Rodriguez lamented how his mother’s small farm in Fresno is suffering due to government-mandated water restrictions during an interview with Carl Kozlowski on the Grown-Ass Men podcast.

“Environmentalists have gone too far,” the comedian says. A California region he called the “bread basket” of the world now suffers from an irregular water flow. It’s not Mother Nature’s fault but regulations meant to protect certain fish that end up putting pressure on hard-working farmers, he says.

“We need to build a dam … but the environmentalists won’t let you,” he says. “I believe human life is more precious than these fish.”

“We’re willing to meet [environmentalists] half way, but they’re not,” he continues. “They’re not living in the real world … we’re simply saying there’s mom and pop [farmers] with 100 acres … they want to continue to farm. It’s an honorable thing to do. Why cut them off?”

Paul, just think about it for a minute, and it will dawn on you what they’re advocating.  You see, Paul, the lunatic environmentalists hate farmers the most.  So called humans which call themselves environmentalists are really, if they were to be honest with us and themselves, are misanthropists.  That is to say, they hate humanity.  Who feeds humanity?  Farmers.  They don’t give a damn about the fish.  They use it as an excuse to harm humanity.

Would a damn kill all of the fish they’re claiming to protect?  No.  But, if it did, would the world stop turning?  Nope.  Would some ecological disaster occur if the fish died?  Nope.  But, if we build a dam, then the farmers could grow crops to feed humanity.  Worse, if you build the dam properly, it could generate electricity, which is becoming a pricey commodity in Cali.  This would elevate much more pain for humanity and actually cause *gasp* prosperity!!!  So called humans which call themselves environmentalists would loathe such an outcome.

Rodriguez also had this to say ….

Rodriguez, who says the radical Earth First! group threatened his life for speaking out on this issue, also bemoaned how our culture protects President Barack Obama from legitimate disagreements.

“Mr. Obama is difficult to criticize without being accused of being some kind of a bigot,” he says. “He’s not prepared for the job.”

So, Paul, at least, understands this much of the leftwingnuts.  It’s how they try to insulate themselves from criticism.  This is why they’re so invested in victimhood.  If they are all victims of something … racism, sexism, or something, then they paint any legitimate criticism as illegitimate, based on the victim status of their champion or cause.  The so-called humans which call themselves environmentalists are a wing of the leftarded wingnuts.  They claim victim status for mother Gaia or some such idiocy.

You’re right, it’s weird that even though Zero has been president for 6 years, he still doesn’t know how to president.

And, how, he’s become an international embarrassment.  Here and here.

Personally, I’m in favor of an Constitutional Amendment.  I’d call it the Zero Amendment, where a sitting president can be removed simply for gross incompetence.  Sure, Zero has committed enough violations to US law to warrant removal, anyway, but, I think his incompetence to shine the light for a need for an alteration to our Constitution.