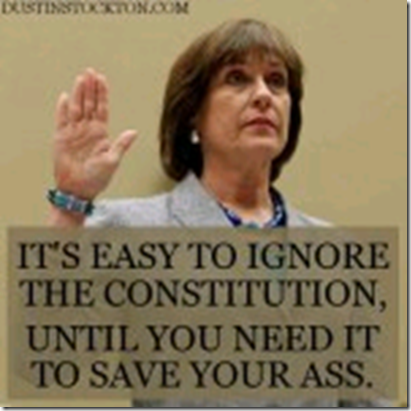 Oops, dang email trails!!!  …..  Actually, to me, this isn’t shocking at all.  That the members of this administration targeted conservative groups up to and including violations of law and the principles which guide this nation, is no surprise given their lack of a moral compass.  They have no compunction.  They have no principles other than ideology.  Whereas, the ideology I extoll is founded on the idea that without principles, the ideology isn’t to be advocated.  And, that my friends, is the difference between the competing ideologies of today.

Embattled Internal Revenue Service official Lois Lerner and an attorney in the Federal Election Commission’s general counsel’s office appear to have twice colluded to influence the record before the FEC’s vote in the case of a conservative non-profit organization, according to e-mails unearthed by the House Ways and Means Committee and obtained exclusively by National Review Online.

The correspondence suggests the discrimination of conservative groups extended beyond the IRS and into the FEC, where an attorney from the agency’s enforcement division in at least one case sought and received tax information about the status of a conservative group …….

The FEC, which polices violations of campaign-finance laws, is not exempted under Rule 6103, which prohibits the IRS from sharing confidential taxpayer information, but the e-mail indicates Lerner may have provided that information nonetheless: “When we spoke last July, you had told us that the American Future Fund had not received an exemption letter from the IRS,” the FEC attorney wrote.

According to the e-mail correspondence, a month after receiving the American Future Fund’s response, the FEC general counsel’s office — which is prohibited under law from conducting an investigation into an organization before the FEC’s six commissioners have voted to do so — contacted Lerner to investigate the agency’s tax-exempt status.