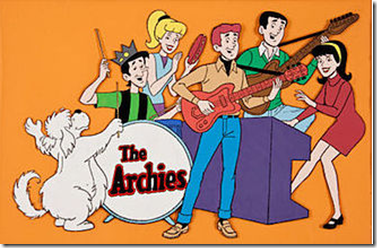 The Archies was an American fictional garage band founded by Archie Andrews, Reggie Mantle, and Jughead Jones, a group of adolescent characters of the Archie universe, in the context of the animated TV series, The Archie Show. The group is also known for their real world success, through a virtual band.

The fictional band’s music was recorded by session musicians featuring Ron Dante on vocals and released as a series of singles and albums. Their most successful song, “Sugar, Sugar“, became one of the biggest hits of the bubblegum pop genre that flourished from 1968 to 1972.[1]

Oddly, this was a semi-hit for these people …

But, then, there’s this song ….. but, with a twist!  The vid, here features Mary Wells (the brunette on Gilligan’s Island).  Takes me back!!!  And, yes, she was much hotter than Ginger!

This entry was posted in Music. Bookmark the permalink.