I’m hesitant to write this post on such a day.  But, I feel it’s important for Christians to be informed on such things. 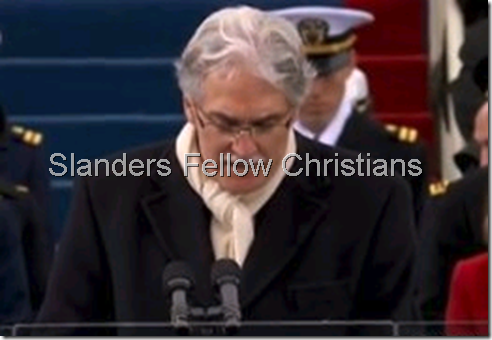 Rev. Luis Leon of the Episcopal St. John’s Church, had some horrid things to say about fellow Christians (assuming he is a Christian) today.  Obama happened to be among the congregation today.  What is it about the Obama’s and how they pick their preachers?

Attacking people of conscience, the Revvvv Leon had this to say.

Quoting from John 20:1-18, Leon said in the same way that Jesus told Mary Magdalene not to hold on to him, it is time for conservatives to stop holding on to what he considers outdated stances in matters of race, gender equality, homosexuals and immigrants.

Okay Luis, name names.  Who are these “captains of the religious right” who have advocated putting blacks back to the back of the bus?

Who are these “captains of the religious right” telling women to get back in the kitchen?

Who are these “captains of the religious right“?

From a preacher on Easter, no less.  Disgusting.  A preacher is going to slander fellow Christians with lies and innuendo during an Easter sermon.

This entry was posted in Christian. Bookmark the permalink.