Blatent And Horrid Hypocrisy On Display In Seattle

Well, I’ve had this for a couple of days, but, haven’t been feeling well enough to write about.  I can’t remember how I came across this, so I apologize if I miss giving proper acknowledgment.  I see Brietbart has finally got a hold of this, as well. 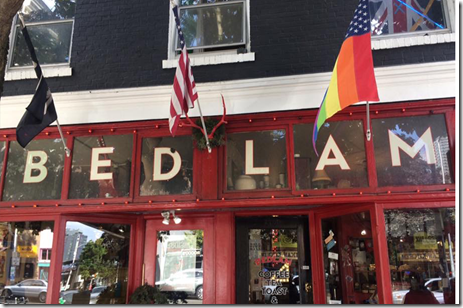 SEATTLE, Wa. — A homosexual coffee shop owner refused service to a group of peaceful Christian abolitionists Sunday and evicted them from his shop.

The abolitionists had been actively engaging people in the city for several days, sharing the gospel, holding signs exposing the abortion holocaust, and handing out literature to people of the streets. According to abolitionist Caytie Davis, the group entered Bedlam Coffee to rest and have a drink but did not engage anyone there.

“We had nothing on us, we weren’t distributing anything,” Davis said. “We bought coffee and went upstairs.” Within minutes of their arrival, the barista ran up the stairs and into the back room to alert the owner of their presence.

A moment later, the owner burst in, shouting, “You have to leave.”

“We were all taken aback because we had no idea what he was talking about,” Davis said. The owner then showed them a pamphlet he had found and demanded to know if it belonged to them. The pamphlet featured an image of an aborted child, as well as rainbow colored imagery along with an explanation of what the rainbow means according to scripture; a symbol of God’s longsuffering mercy toward sinners.

“None of us had dropped anything in the store,” Davis said. “But we told him yes, it was one that we had been handing out in the city, and asked where he’d found it. He told us he found it outside.”

When the abolitionists asked why they had to leave, the owner told them, “This offends me.”

Abolitionist Jonathan Sutherland pointed out that the literature had been found on public property, but the owner repeatedly cut him off, saying “Shut up! Shut up!”

“We tried to talk to him and he wanted nothing to do with it,” Davis added.

“So you’re not willing to tolerate our presence?” Sutherland asked.

“Will you tolerate my presence?” the man responded. Sutherland assured him they would. “We’re actually in your coffee shop,” he said.

“Really?” the owner demanded. “If I go get my boyfriend and f*ck him in the a** right here you’re going to tolerate that?”

“That would be your choice,” Sutherland answered. But the owner would not be persuaded. “Are you going to tolerate it?” he asked again. “Answer my f***ing question! No, you’re going to sit right here and f***ing watch it!”

“Well, we don’t want to watch that,” said Caleb Head, another abolitionist.

“Well than I don’t have to f*cking tolerate this!” the man said. “Leave! All of you. Tell all your f*cking friends, don’t f*cking come here.”

The abolitionists agreed to leave, but Davis took the opportunity as they left to share the message of salvation through Jesus Christ. “Just know that Christ can save you from that lifestyle,” she said.

As they exited, abolitionist Jes Sutherland commented, “Seattle has proved itself to not be tolerant.”

“They had good coffee,” Davis said. “It’s just too bad the service sucked.”

The abolitionists say the treatment they received is hypocritical, in light of recent public discrimination cases involving Christian business owners who have had to fight lawsuits over their refusal to provide services to homosexual weddings on the grounds that to do so violates their faith.

Still, they said they do not wish any harm to come to the coffee shop owners and do not want to see them unfairly treated as many Christian business owners have been.

“On the contrary,” Davis said. “My whole thought, even after, was that I hope that they continue to think about the literature, and it convicts them to the point of repentance.”

There is a video of the encouter at the link above.  WARNING!!!!  The language is foul and graphic!

Now, while this does demonstrate a stunning display of hypocrisy, there are differences between the instances of this vs, say, trying to force a baker to bake a cake for an occassion the baker disagrees with.

As stated, I’m not feeling well.  So, I’d rather not engage in a back and forth with anyone at this time.  But, it does bring up some interesting questions.

Would it be better to simply let the markets sort this out?  Or, is this beyond the pale of the market place?

This entry was posted in Christian, Economics, News and politics. Bookmark the permalink.

18 Responses to Blatent And Horrid Hypocrisy On Display In Seattle