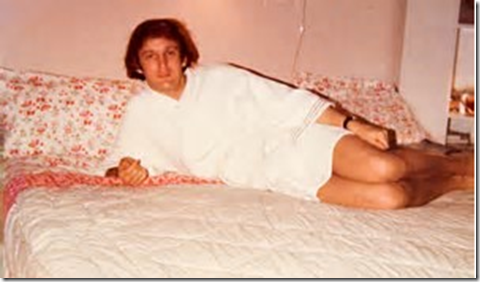 Sorry for all of this, but, it was necessary to demonstrate the depths our “journalists” have fallen to.

So, the ever pertinent NY Slimes had an article out about Trump …….

At night, Trump moves through the residence in a bathrobe, with Keith Schiller as only aide who occasionally pops up https://t.co/4sFV11e2Jo

“When Mr. Trump is not watching television in his bathrobe or on his phone reaching out to old campaign hands and advisers,” they report, “he will sometimes set off to explore the unfamiliar surroundings of his new home.”

For some idiotic reason, people picked up on this.  So much so, … well, I’ll let Twitchy tell this story ….

The detail about Trump wearing a bathrobe so enthralled the media that Press Secretary Sean Spicer addressed it during a brief press gaggle on Air Force One Monday, saying that as far as he knew, President Trump doesn’t own a bathrobe.

Media then goes full stupid and tries to call Spicer out because of the decades old photos (such as the one above) showing Trump in a bathrobe.  (Click on the Twitchy link for examples of members of the media “fact-checking” Spicer’s comment.)

Truly, the LSM has a mental deraignment regarding all things Trump.

WTF is wrong with these lunatics?  These people have entirely discredited themselves.  These supposed “journalists” aren’t worthy of a WordPress blog.  They have the mental and emotional capacity of a pre-teen.

The only redeeming occurrence from all of this mental deraignment is that the people will finally all recognize the LSM is nothing but a collective of leftist hacks pretending to inform, while intentionally misinforming the people.  It’s all but over.  And, from the ashes, something new will come.