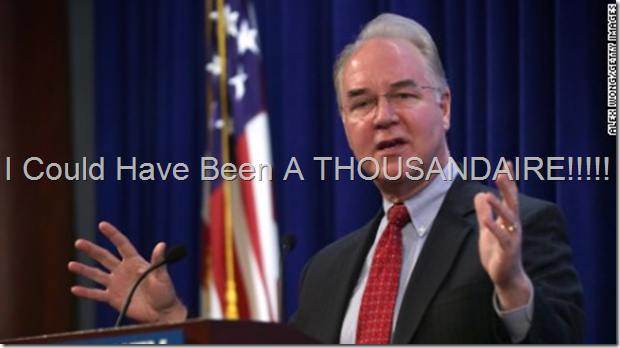 Holy crap these people are desperate!!!!

So, Trump’s pick to run the HHS is one Dr. Price, a US congressman is accused of insider trading!!!!!  Worse, it’s almost true!!!!!

So, CNN has learned that Dr. Price bought some stock of a bio-med company, and then, *GASP!!!* introduced legislation which could have helped the said company (Zimmer Biomet).

CBS was happy to pile on, except, they let this little tidbit into their attack article …..

According to House records, Price, R-Georgia, bought between $1,000 to $15,000 worth of shares in the company Zimmer Biomet last March.

The Devil’s in the details on this one.  Twitchy was able to shed some light on this ……

.@RepTomPrice has a Morgan Stanley brokered-directed stock portfolio. He is not personally engaged in trades made on his behalf. (2/x)

In March 2016, his broker rebalanced his portfolio and included the purchase of $2,697.74 Zimmer Biomet stock, among others. (3/x)

CNN says that @RepTomPrice introduced legislation after purchasing stock. This is demonstrably false. Work on this began in 2015! (5/x)

Yeh, the huge investment of $2697.74.  That, in and of itself is enough to know the whole story is entirely garbage and simply character assassination.

The sad part of this is that there are congress critters who do enrich themselves in the manner CNN is attempting to cast Price as doing.  Given the left’s propensity for projection, I’d bet $2,697.74 that CNN knows more than one leftist congress critter who has engaged in such activity.  But, this garbage is ludicrous.