That Voter Fraud That Never Happens Is Happening Across America!!!!! 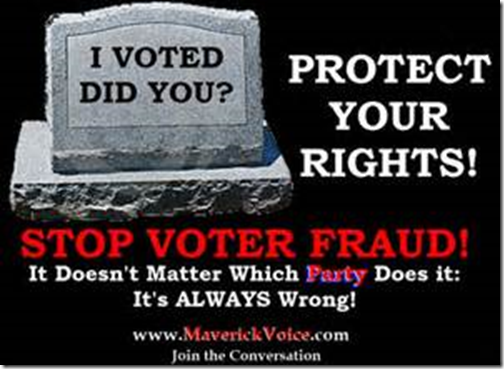 Golly, it seems just a few years ago we were told this sort of stuff never really happens, and that if you’re for voter ID laws, you’re some sort of racist.  But, then, this happened …..

He fought in World War II. He died in 2014. And he just registered to vote in Va.

RICHMOND — The FBI and local police are investigating how at least 19 dead Virginians were recently re-registered to vote in this critical swing state.

One case came to light after relatives of a deceased man received a note congratulating him for registering, Rockingham County Commonwealth’s Attorney Marsha Garst said Thursday.

“His family members were very distraught,” said Garst, who confirmed the existence of the FBI and police investigation but said she could provide few details because the case is ongoing.

All 19 were initially registered as voters in the Shenandoah Valley city of Harrisonburg, although a clerk double-checking the entries later raised questions about one. She recognized the name of Richard Allen Claybrook Sr., who died in 2014 at age 87, because his son is a well-known local judge. She happened to recall that the judge’s father had died. ……..

Yeh, that’s not some conspiracy theory RW blog, that’s the Washington Post.  But, the day before that, we saw this …….

The Cascade Mall shooting suspect, Arcan Cetin, may face an additional investigation related to his voting record and citizenship status.

Federal sources confirm to KING 5 that Cetin was not a U.S. citizen, meaning legally he cannot vote. However, state records show Cetin registered to vote in 2014 and participated in three election cycles, including the May presidential primary. …….

Well, it’s one thing for dead people to vote, it’s another for a murderous Muslim immigrant illegally voting.

Oddly, LSM didn’t seem to want to cover the case of Cetin voting.

Of course, the question not being asked by any of the media is how often is this happening?

Even more odd, there are still people out there wondering why so many Americans have gravitated to Trump.  I’ll try to put it as simply as I can for the leftards.  Without enforcing the integrity of our elections, we have no democracy.  Without our democratic forms in our US Constitution, we have no America.  We have tyranny and anarchy.  The Right of this nation is assumed to be better armed than the left.

On a different thought, but, not totally unrelated ……. doesn’t it seem pretty odd hypocritical of the people demanding safe-spaces offer none to the people they disagree with?

Keep it up, snowflakes.  You’re about to get some blowback you can’t handle.

21 Responses to That Voter Fraud That Never Happens Is Happening Across America!!!!!