My Thoughts On The Trump Shake-Up And More!!! 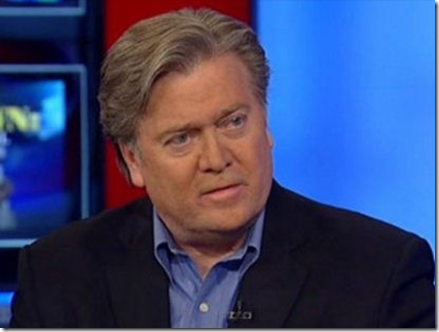 Well, I’m tired as all get-out, but, I promised a post, and so we shall have it!

The last couple of days the media has been all abuzz about Trump’s hiring of Steve Bannon, the co-founder of Breitbart News.

Many have opined this is a desperation move.  It may, or may not be, but, I believe the move was brilliant, but, not timely.  It’s brilliant because Bannon and Trump are very similar in views.  In the recent past, people have spoken and written about a need for Trump to change in order to appeal to people.  I agree.  But, not like most of the talking heads would think.  Trump needs to change, that is to stay focused, not his verbiage or demeanor.  I believe Bannon can provide said focus, if Trump will listen to him.  While some people may disagree, the fact is the Trump campaign has been playing defense for too long.  In order for him to win, his message needs to be aggressive, in-your-face, and most importantly, focused.  You see, you have to dance with the partner who brought you to the dance.  Having Trump pretend to be a Romney-lite is a sure recipe for disaster.  That’s not who he is, he can’t.  But, he has to stay focused.  If he listens to Bannon, he has a real good chance of winning the election.

Trump recently gave two very good speeches.  They are sure to gain him some votes.  However, what’s dominating the news cycle?  What happened?

Many viewers wonder: Why are media outlets freezing out THIS Donald Trump news?

I’m seeing a lot more talk in the media about Trump’s campaign manager than Trump’s foreign policy speech, which was actually substantive.

It’s another unforced error.  We all know the LSM is in the tank for Hillary.  Why give them something else to cover after his speeches?  But, not only is the Trump campaign making unforced errors, they’re missing easy low-hanging-fruit opportunities.  The US competing on the world stage demonstrating American exceptionalism?  Is that something the Donald could tie to his campaign?  Given Zero’s and Hillary’s lack of interest, I thought this was a golden opportunity for Trump to demonstrate that he’s literally in the US’s corner.  In a campaign, perception and image is everything.  While I don’t think he should have gone to Rio, he should have demonstrated that he was following very closely.  While we’re on the subject, here’s another golden opportunity that he’s letting slip through his hands.  …………….

So, people in Louisiana are dying and being flooded out, again.  The left savaged Bush, and by extension, Repubs for a seeming lack of interest.  Well, Hillary’s campaigning, and Zero is golfing.  If Trump shows up and starts handing out food or clothes or whatnot, what’s the visual?  That’s a win-win-win!!!!  Find some conservative Black ministers in La, (there are many) and go do it!  <———–  Folks, this is the stuff which wins elections.  You bury your opponent with imagery!  You demonstrate that you care, you demonstrate they don’t.  You demonstrate that you’re willing and able actually get something done, and you demonstrate that they aren’t and won’t.  He did well in Wisconsin, but, he has to follow up and follow through!

I’ve noticed many are now following the various state’s polling.  I’m here to tell you at this time of year they are meaningless.  Like the flooding in La, we know it’s only mid-August.  We absolutely know there will be more significant events occurring in the US and abroad between now and November.  It’s how the candidate reacts, and how the candidate paints their opponent which matters, that will sway the polls.  If things stay the same between now and November, Trump will lose in a landslide.  But, things won’t stay the same.  The fact is, I believe Trump is near his base.  That is to say, I think he’s about bottomed out.  At this time of year, that’s great news for team Trump.  You know where you’re at, you know where you need to improve, and you have time to do it.

First and foremost, in this modern electorate, no Repub will win the White House without Florida.  (This assumes Texas goes Repub, if Texas doesn’t, then forget it, it won’t happen.)  But, you need Florida.  Go secure Florida.  You have to have it.  I think it’s easily done, especially with the message of Trump.  And, this could give you an advantage in other more competitive states, such as Az and NM.   I don’t believe the older Latino immigrants, the ones who have been here a long time like the new ones.  Play that up!!!!!  I saw this dynamic in Texas and in a Kansas town I used to live in.  They don’t like the new immigrants.  All he has to do is to change his message a little bit and you’ll have millions of Hispanics volunteering to build that wall.  They came here to escape the mess that many seem so hell-bent on importing.  Once that’s done, attack!  Go to the heart of leftardism, and make Hillary play defense.

Cruz once made a comment about “New York values”.  While I believe that was a mistake to say, it’s true.  I can’t even think of one New York Repub which I like/respect, much less a leftard New Yorker.  The last one I knew about moved to Arizona.

But, Trump can speak their language.  I can’t.  The world I live in is entirely different than the world they paint.  No, I don’t believe Trump can win NY, but, he can make Hillary move her resources there …….. and then, you win.

Conversely, Trump is only up by 6 in Texas.  If the margin gets any smaller he’s going to have to go to Texas.  ……… trying to speak to people who don’t speak his NY language.  If there were only a Texas surrogate to be had.  But, that’s a brag for another occasion.

Lastly, ignore the Libertarian.  Don’t give Johnson any air.  So far, team Trump seems to be doing pretty well at this, in spite of the LSM’s overwhelming desire to see team Trump discuss him.

Well there’s lot more to discuss, but, that’s the US prez race post for the night.  I may have more on other subjects later.

33 Responses to My Thoughts On The Trump Shake-Up And More!!!