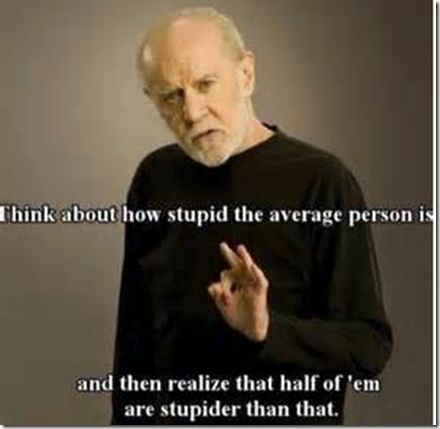 Well, it’s past time for me to give the readers here something else to chat about.  I meant to do this yesterday, but, I was/am preoccupied by the tree laying on my house.  It’s very disturbing.  Still there were a couple of stories which caught my eye, yesterday.  I thought I’d share them with the readers here.

The first one is this bit of massive stupidity. ……

Is Islamophobia accelerating global warming? That was the actual title of a lecture given earlier this week at Massachusetts Institute of Technology by a professor Ghassan Hage.

I can’t decide who should be more upset: the Australian taxpayers who are funding this loon’s position as a “future generation professor” at Melbourne University.

Or the alumni (including the Koch brothers, Michael Bloomberg, “Buzz” Aldrin and IM Pei) and donors who must surely now be asking of MIT “I thought the M stood for Massachusetts not Mickey Mouse. What the hell’s happened to the place? Why is student time and university funding by wasted on this unutterable horseshit?”

Actually, the answer to the question is quite simple.

Ghassan Hage fits perfectly the profile required for anyone who wants to get on in modern academe.

Hage, born in Lebanon before moving to Australia, is the author of several books exploring race in Australia, including, “White Nation” and “Against Paranoid Nationalism.” In online essays, he has called airport security an example “in which Westerners require from those they racialize an exact obedience to the letter of the law.”

A supporter of the anti-Israel Boycott, Divest and Sanctions movement, he has likened Israelis to “slave owners” in a tweet and has called Palestinian militants “freedom fighters” in an essay. He ended that particular essay, “A Massacre Is Not A Massacre,” sarcastically: “I have such a limited brain and my ignorance is unlimited. And they’re so f—— intelligent. Really.”

For those of you who were unable to attend the lecture, here is what you missed:

This talk examines the relation between Islamophobia as the dominant form of racism today and the ecological crisis. It looks at the three common ways in which the two phenomena are seen to be linked: as an entanglement of two crises, metaphorically related with one being a source of imagery for the other and both originating in colonial forms of capitalist accumulation. The talk proposes a fourth way of linking the two: an argument that they are both emanating from a similar mode of being, or enmeshment, in the world, what is referred to as ‘generalised domestication.’

MIT is ranked number one in the world among universities for research. Annual tuition fees cost $45,000. Graduates can be pretty sure of a good job afterwards.

But why? If I were an employer would I really want to take on a graduate from a department – MIT Global Studies and Languages – which fostered such cod-intellectual gobbledegook?

Well, we all know socialists believe in the imaginary “global warming”.  Any rational person would recognize that the climate has changed throughout history and will continue to change regardless if the socialists/Marxists take over or not.

I don’t know if “Islamophobia” is an actual word.  But, even if it is, it’s probably not being appropriately applied.  Again, any rational person in the world would know Islamization of any people or place should cause great concern.  All one has to do is look at the state of any Islamic state and the conditions their people live in.  It’s a horrid mass of hate, war, poverty, and suppression.

But, how did we get to this point?  How is it that a huge part of a civilization (Western) has come to believe in imaginary climate and totally disregard a very real and immediate threat? —— well, I could probably write a book on this and still not adequately explain all that needs to be stated.  But, I suspect the next article would cast some light on this! ……

Year 2 SATs: Maths Question Aimed At Six And Seven-Year-Olds Is Completely Stumping Parents
Parents are claiming it’s too hard for their kids.

Parents are puzzled over a maths question that is aimed at Year 2 pupils taking their SATs exams.

Mum Louise Bloxham tweeted a photo of the task that involved working out how many people were on a train.

The question states: “There were some people on a train. 19 people get off the train at the first stop. 17 people get on the train. 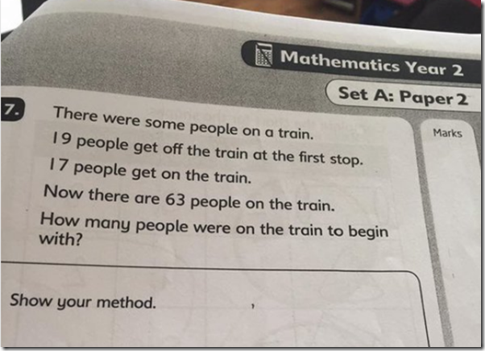 The photo was then picked up by the Facebook page ‘Parents Against Primary Testing‘.

Parents on both Twitter and Facebook were outraged that the question has been written for six and seven-year-olds.

Some parents argued that they could only just work it out themselves, let alone their children.

Others argued the question was “ambiguous” and a “trick” for children taking a test. …….

Other versions of the story had parents angry that some students were reduced to tears and complained that the poor children’s egos were devastated.

BTW, apparently, the FB page actually got the answer wrong, and have subsequently taken down the posting.

At some point, many people in Western society have become unfamiliar with what a “test” is and its purpose. IT’S A TEST, YOU LOSER PARENTS!!!!!!!!  YOU IMBECILES!!!!!!  It is to evaluate the level of math understanding your children have!

At what time did we get to the point where it was no longer a good thing to challenge young minds to learn and excel?

This is a large part of why people believe in global warming, embrace socialism, and think an Islamic nation is some sort of alternative lifestyle of equal value to the rest of the world.  They make the Marquis de Sade look like Santa Claus!  On a near daily basis we see acts of depravity committed against fellow human beings in Islamic nations around the world.  Not only is this accepted in the various Islamic nations it is encouraged.  Indeed, in many it is codified by law!

But, yet, a most prestigious American university will invite some idiot lunatic babbling insanity about Islamophobia.  All the while, Westerners will cry, moan, and complain about testing and challenging their children over a simple math question.

This entry was posted in Education. Bookmark the permalink.