Well, I’ve some things to sound off about …… and they’re only tangent in connections.  But, they are connected. 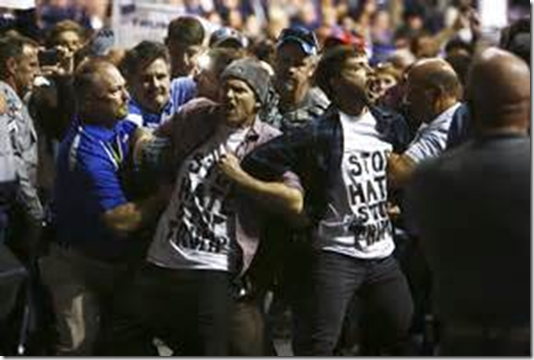 Over last week, we saw where some violence broke out at some Trump gatherings.  Indeed, in Chicago, they cancelled the gathering even before Trump could make it there.  Political pundits and talking heads all over the country were quick to condemn ……..  Trump.  Even after some pinhead tried to rush the stage Trump was speaking from.

The Republican rivals were quick to pile on Trump, as well.  I was totally and wholly sickened by their responses.  Every damned one of them.

As everyone who reads this site knows I’m no Trump fan, I’ll still call it as I see it.  The people responsible for the violence are the dumbasses committing the violence …… be it some scumbag in the audience, or other scumbags committed to violating their fellow Americans’ First Amendment rights. You don’t like what Trump and his fans have to say?  That’s too f’n bad!!!!  You want to counter protest?  That’s fine.  You want to disrupt the gathering as to not allow Trump or his supports to speak and be heard?  Then, you are the ones committing violence, and violence in an horrific manner which threatens the fabric of our Union. We don’t have to agree with what he says to support his right to say it.  I 100% stand with Trump in this issue.

Typically, people who attempt to disrupt free speech are imbeciles incapable of forming legitimate arguments to what is being stated.  They have been too poorly and improperly educated and are little more than emotive mounds of flesh.  It’s more than just ironic that the same people who equate Trump to Hitler and call him a Fascist would be the first to deny him his right to speak and be heard.  It’s not ironic, it’s projection.

I’ll let the little losers who do such idiotic things in on a secret they seem incapable of learning …….  every time a little brownshirt screams and hollers about someone being a fascist, it causes more hardened resolve and attracts more and more supporters.  It’s a free campaign ad for Trump!  I find there is no greater threat to the Republic than people believing it is okay to silence people they disagree with.  Further, the people who do such things are lazy dullards, incapable of doing the work necessary to maintaining a free society.

We let people make statements, if we don’t agree with the statements, we make our own statements in response, in a civilized world, we call this “discourse”.

Well, enough of the Trump/Suyts love-fest.  We’ll go on to the second greatest threat to our Union.

“A popular Government, without popular information, or the means of acquiring it, is but a Prologue to a Farce or a Tragedy; or, perhaps both. Knowledge will forever govern ignorance: And a people who mean to be their own Governors, must arm themselves with the power which knowledge gives.” James Madison, 1822.

In recent years, I’ve don’t believe I’ve ever been more optimistic about the future of America because of the advent of the new ‘conservative’ media.  After an entire lifetime of being subjected to leftarded propaganda, finally the people were given information which would have otherwise never been known.

In recent months, I’ve never been more depressed about the future of America because of the new ‘conservative’ media.  I’ve not found one outlet which isn’t a shill for one Repub candidate or another.  There can be no better example than Breitbart News.  This time last year, I would have said this is the go-to site for real news and conservative insight.  It’s not.

Recently, one of their reporters was roughed up a bit for trying to ask “The Donald” a question.  I won’t bother with the details of the incident.  You can Google it if you wish.  When I first saw the story, I thought, “oh, boy!!!  Now the lovefest for Trump ends!!!”  Reading Breitbart over the last several months has been like reading a Trump campaign ad over and over again.  But, it wasn’t to be as I thought.  Instead of running to the defense of their reporter, they tried to silence her co-workers who were supporting her.

But, that’s not really the impetus of the mass exodus at Breitbart.  But, the straw which broke the camel’s back.  I’ll let Ben Shapiro tell it ……

“Andrew’s life mission has been betrayed,” Shapiro wrote. “Indeed, Breitbart News, under the chairmanship of Steve Bannon, has put a stake through the heart of Andrew’s legacy. In my opinion, Steve Bannon is a bully, and has sold out Andrew’s mission in order to back another bully, Donald Trump; he has shaped the company into Trump’s personal Pravda, to the extent that he abandoned and undercut his own reporter, Breitbart News’ Michelle Fields, in order to protect Trump’s bully campaign manager, Corey Lewandowski, who allegedly assaulted Michelle.”

Or, another former Breitbart employee tell it ……

“The company no longer resembles the ideals that inspired me to start writing for them three years ago. Some of us have been fighting behind the scenes against the party-line Trump propaganda for some time, but without any success, unfortunately. Breitbart News is no longer a journalistic enterprise, but instead, in my opinion, something resembling an unaffiliated media Super PAC for the Trump campaign. I signed my contract to work as a journalist, not as a member of the Donald J. Trump for President media network.

We can only speculate why Breitbart has made this turn.  Will they try to go back to being a journalistic enterprise after the elections?  I don’t see why.  They will have lost all credibility.  Sure, I still read them.  But, only in the manner I read all other LSM, with an understanding that they’ve intentionally slanted their news.  That rather than tell me the truth, they will pursue an agenda, first, and then the news.  For some reason, beyond my fathoming, they’ve decided to pursue shilling for Trump in the Repub primaries.  I suppose it wouldn’t bother me much, except they pretended to be the voice of conservatives.  Donald Trump, whether you like him or hate him, simply isn’t a conservative.  Some notions he extolls are conservative, others are most definitely not conservative.  But, for whatever reason, he’s their man …… right now.   I read a statement from Joel Pollak this morning.  It was full of vile and venom towards Shapiro, (Pollak now says it was “an effort to make light” of the situation).  Two others have resigned since then.  Pollak, though, seems to have the job of “editor-at-large” now, which, as I recall, was Shapiro’s job, so, well, we all do what we must, no?

But, all of this probably doesn’t mean one whit to the general public.  That is to say, none of this will probably sway the upcoming primaries tomorrow.  Another “super-Tuesday”.

Folks, this can very well tell the tale.  My take on this, in reading the polls …..

Rubio is done.  And, he’s a moron.  He’s not going to even take Florida.  He’ll be out of the race Wednesday or Thursday ……. which is about a month too late.  Oh, yeh, he’s going to lose every other state, as well.  All of his political capital will be wiped out, tomorrow, and he’ll be relegated to some footnote.

Kasich has a decent chance at winning Ohio.  Polls at any of the other states indicate he’s no chance of winning anywhere else, tomorrow.  This seems to be part of team Cruz’ strategy.

By all reckoning, Trump is going to win Florida, the biggest prize.  I think team Cruz has decided to let Kasich deny Trump of the Ohio delegates, and then try to win in the other states.  The polling out of Misery is very sparse (only one poll with a sampling size of 208 people).  I have no idea how those people will vote.  Or if it’s an open or closed primary.  That said, the conservatives of Missouri are often pretty close to the conservatives of Kansas in political alignment.  In other words, Cruz stands a good chance of winning that one.  Cruz seems to be surging in Illinois.  I think in states where Cruz has won he polled losing to Trump, with the exception of Texas, in which he polled higher, but, out performed his average in the polling.  In Arkansas, though, he finished worse than his polling.  But, it seems he typically out-performs the polls.  I don’t know why.

That said, Trump is leading or tied in the polls for every state.  If he sweeps the states (which I don’t think is likely) then it’s probably over.  I don’t see even Cruz getting past that.  If Trump takes Ohio, then, I think Kasich will probably drop out.  But, he’s vowed to stay through the convention.

The way I think it will go is that Trump takes Florida and North Carolina.  I think Kasich will take Ohio, and I think Cruz will probably take Misery and Illinois.  …… If that happens, then, we’ll have a persistent Kasich.  Regardless, it’s a two-man race.  Kasich can’t catch Trump, or even Cruz, unless Cruz falls down with a stroke or something.  It’s just not going to happen for Kasich.  And, again, there’s no way Repubs are going to commit suicide and pick a #3 finisher over the #1 and #2 finishers.  Kasich is holding onto a fantasy.

While we’re discussing “fantasies”, someone please tell me how this is possible in a very conservative state ……. 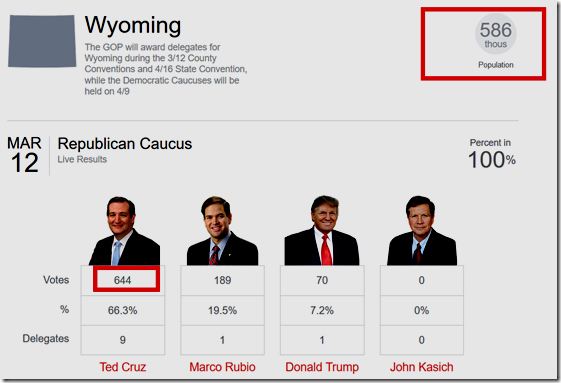 Anyway, that’s all I got for now.  What do you think?

42 Responses to Political Roundup From Suyts!!!!!