Adventures Of A Contract Tech Worker!!!!! ….. And The World We Live In 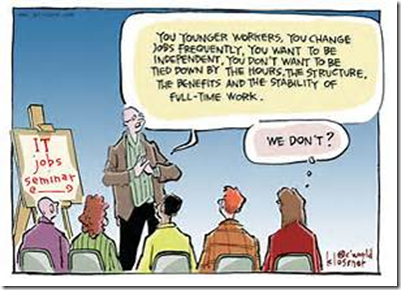 From time to time I take some small contract tech job.  These occasions never cease to amaze me, mostly from the stupidity of it all, which is probably why I don’t do it full time and travel.

So, I recently accepted a very small, very pud job to do.  Essentially it is to upgrade some users to new PCs at an office.  I’ve also got to reformat the old drives in the old PCs.  The very notion that there are jobs out there to do this has me worried for the future of humanity.  This particular job has me doubly triply quadruply worried!!!!

How is it that you can have an office full of PCs (someone had to deploy the originals) and a functioning office with the PCs functioning that you need to contract someone to unbox some new PCs and deploy them?  It gets worse ….. this is a national company with offices all across the country.   It’s even worse than that!  This company is an internet provider!!!!!!  But, they contracted with a company which contracts with a company who contracts with me. ……. and it’s still worth my time to do it!!!!

I should have known stupid would be stalking me from the moment I agreed to something like this.  And, it did!  Worse, it caught me!!!!  Originally, I was suppose to be there Monday morning.  Alas, there was some confusion.  It was determined that they’d be closed on Monday for MLK day.  The top contractor called me Sunday to confirm that I’d be there Monday ……

I told them I thought they were closed for MLK day ….. after a pause the lady on the other end said she was sorry to bother me, and I was right, I was suppose to be there on Tuesday.  So guess what day the office was really expecting me?  Yeh, they weren’t closed on Monday.  That was the other office in the same town.  But, they weren’t closed for MLK day, they’re always closed on Mondays.  Did I mention my wife is the one who roped me into working with these people?  (She was working at the other office in the same town.)

The instructions provided me were straight forward and simple enough that even a person unfamiliar with PCs could have done the job …… had the instructions actually been for the job I was doing.  The instructions were for deploying Win 7.  Oddly, I didn’t deploy any Win 7 units.  I deployed Win 8 units ……… no, really!!!!  Stop laughing!!!!!  I’m sure there’s a perfectly good reason why large national company wants Win 8 on there PCs!!!  (Note:  Only one unit was a touch-screen).

For those unfamiliar, Windows 8 was such a horrid release Microsoft upped it’s schedule and not only released Windows 10, but, is giving Win 10 away in an effort to move people off of Win 8 and previous versions.  In other words, Microsoft is looking to kill Win 8 ASAP.  Now, mind you, the office I was upgrading was their advertising office.  These people are not tech workers.  Many of them probably hold their PCs in contempt already.  Now, this internet providing, tech company, if you will, is going to subject their own workers to an operating system that so bad even Microsoft is embarrassed by it.

BTW, the interface between Win 7 and Win 8 is so different the instructions were rendered pretty useless.  Fortunately, I’m a tech worker, so I can find the crap I need to.

Getting through the showing up a day late, and the useless instructions, I found a different problem.  One of the little chores one has to do to deploy a PC in an office is to make them a member of the network, in this case, it was a domain.  As is typical, all of the necessary software and applications aren’t stored locally, but, on a server.  There are some very viable alternatives to such a setup, but, that’s not what they’re doing.  Oddly, no one ever thought to register the computer names on the domain server ……. the domain server ….. which no one locally has access to.  Oddly, someone did have someone already change the computer names.  No one bothered to write the name changes down, though.  Fortunately, even techs have tech support!!!!  That role was to be filled by the original contractors.  So, I call them and tell them the credentialing isn’t working out ……. silence for a while.  Then, I’m told they don’t have access and that’s someone else’ problem.  I was awestruck!!!!   There is a fortune to be made as being a useless 3rd or 4th party!!!!  You can give useless written instructions, have people show up on the wrong day and be tech support who renders no technical support!!!!  And large companies will pay you large sums of money to do so!!!!!

Sometime late in the morning I got a call from the original contractors …… not to help me with my problem, no, but, to rather screen me to make sure I’m qualified to do the job I contracted to do.  You see, this part of the original contractors thought I was suppose to be there tomorrow.  The screening process is basically asking you if you know how to join a PC to a domain …….. I $hit you not.  I actually took 3 days off of my real job for this BS!!!!  Which I only am working 2 because …. well, someone took Monday off so, everyone is closed on Mondays or something.  How f’n hard would it have been to pick up the phone and ask them?  They certainly could call me and they didn’t seem concerned about asking me inane questions.

As it turns out, I had to call the tech support people of the company I’m installing the new PCs for and have them register the computer names with the server.    You’d think that would solve all the problems, but, it doesn’t, really.  You see, it apparently takes quite a bit of time to port all of the apps to be useable to the PCs.  I’m suppose to kill their old PCs but, the apps they need to do their jobs aren’t readily available on their new ones.  I don’t know why I think these things shouldn’t be a Charlie Foxtrot every time I do one.  They are each and every time.  And, all of it is senseless.

This entry was posted in Uncategorized. Bookmark the permalink.

26 Responses to Adventures Of A Contract Tech Worker!!!!! ….. And The World We Live In