Shock News!!!! Skeptics Were Right, Again!!!! And The LSM Continues To Lie And Obfuscate!!!!! 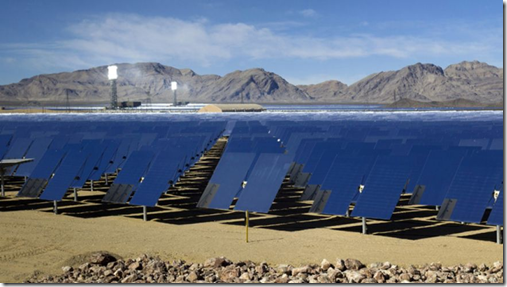 But, the flawed thinking appears to be contagious.  Read this article …..

Even as the Obama administration announces another $120 million in grants to boost solar energy, new reports indicate a centerpiece of the administration’s green-energy effort is actually a carbon polluter.

Yet it is producing carbon emissions at nearly twice the amount that compels power plants and companies to participate in the state’s cap-and-trade program.

That’s because the plant relies on natural gas as a supplementary fuel.

According to the Riverside Press-Enterprise, the plant burned enough natural gas in 2014 to emit 46,000 metric tons of carbon dioxide. But Ivanpah, while in the cap-and-trade program, is still considered a renewable energy source because it technically produces most its energy from solar.

Built by BrightSource Energy Inc. and operated by NRG Energy, the Ivanpah project has been mired in controversy from the start.

Taxpayer advocates object to the federal support. Environmentalists say it would hurt the endangered desert tortoise and lament that 3,500 birds were “fried” by the heat produced by the plant in its first year.

But the natural gas factor raises the fundamental question of whether this plant — and others — are undercutting their own green energy gains by emitting carbon pollution in the process, while not producing anywhere near the level of electricity of a regular power plant.

“This is a prime example of when good intentions go bad,” said H. Sterling Burnett, a research fellow at the Heartland Institute.

Natural gas, used at several California operations, can be used during the evenings to help protect against overnight freezing and temperature changes that can hurt equipment.

Yet while natural gas is not as environmentally damaging as coal or oil, it is a fossil fuel generally not considered “green.”

Ivanpah’s original license allowed it to use millions of cubic feet of natural gas with the understanding the total would not exceed 5 percent of the energy the project gets from sunlight.

BrightSource originally estimated the plant’s main auxiliary boilers would use the gas for an average of an hour per day.

But in March 2014, they petitioned the California Energy Commission for permission to increase that to roughly 4.5 hours per day. In the petition, they cited a need to protect equipment and “maximize solar electricity generation.”

The company defended the plant operations.

“Less than 5 percent of electricity generated is attributed to natural gas, which … qualifies 100 percent of the plant generation as renewable,” NRG spokesman David Knox wrote in an email.

Michael Ward, information officer for the California Energy Commission which provided the emissions data, confirmed that Ivanpah indeed falls below the 5 percent mark.

But the 5 percent figure does not tell the whole story — as California does not account for emissions produced when a power plant is not generating electricity, according to Ward.

So the actual percentage of natural gas use could well be higher.

“If it were any other energy industry besides solar, the plant never would not have been built,” said David Lamfrom, director of California desert and national wildlife programs at the National Parks Conservation Association (NPCA).

Lamfrom said that “political pressure pushed this project through without proper input from the taxpayers and without them being adequately informed of exactly what kind of project this was.”

He said officials “generated enough momentum to make this project happen in order to meet the [deadlines for] the stimulus funding.”

According to Lamfrom, designers also erred in placing Ivanpah between the tallest mountains in the Mojave where there is significant cloud cover and dust which would interfere with the sunlight.

Burnett noted that low sunlight only increases the use of natural gas: “You can make solar power as cheap as you want. If the sun is not shining, or it is cloudy or rainy, it will require natural gas to ramp up [the plant] quickly when solar power goes offline. They say it is green, but that assumes that there is a power source without any environmental impact.”

Before we go on to anything else, I must note, because there may be some brainless climatetard wandering by, that at this time of year, in the North Hemisphere, we have more hours of darkness than daylight.  During the hours of darkness, the referenced plant and any other solar plant is generating exactly zero amounts energy.  None, nothing, nade.  So, it must be supplemented with other sources of energy.  Given the 5% figure, then we can be assured the plant generates less than 50% of the needs of it’s customers.  The majority of the energy provided to the customers is still mostly from so called fossil fuels.  We can build 1000 more solar plants just like Ivanpah and the percentage won’t change one iota.  This is something skeptics such as myself had stated over and over and over again.

I find it fascinating that “environmentalists” no longer care about endangered species.

The idiot writers for Fox reference “oil” in this article.  Last I checked, oil was used for less than 1% of the US’ electric generation.  It’s not now, nor will it be anytime in the near future an issue to even consider.  Regardless, under current emission standards in the US, neither coal nor oil present any environmentally damaging emissions.

That the morons placed the plant between two mountains only demonstrates the idiocy of the lunatics and their advocacy.  These are very, very stupid people we’re dealing with.  Our government administrators actually gave these dumbasses over $1/2 billion dollars to plant a solar station between two mountains.  Sounds about right.

On an aside, let’s consider the GHG emissions generated by creating this monstrosity ……. it never was about global warming, the belief that GHG’s actually raise the global temps. It’s about making energy more expensive to the people, and gaining more control over the people.  Even the most simplest of people can see this.

This entry was posted in Climate, Energy. Bookmark the permalink.

18 Responses to Shock News!!!! Skeptics Were Right, Again!!!! And The LSM Continues To Lie And Obfuscate!!!!!