Facebook To Do Censorship For Governments One Nation At A Time!!!!!

This is most distressing to me. 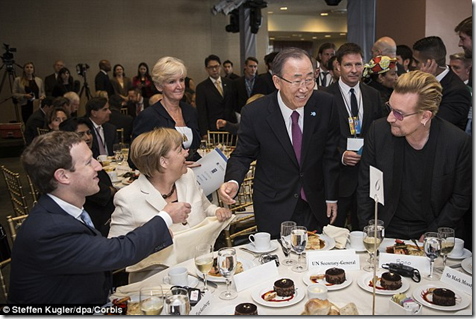 German Chancellor Angela Merkel confronted Facebook founder Mark Zuckerberg in a conversation overheard at the UN about those using his social network to post hateful material.

Speaking to the European leader at a luncheon, Zuckerberg was heard saying ‘we need to do some work’ in reference to the German push against racist posts on the Internet.

‘Are you working on this?’ Merkel, who has seen an increase in violence against immigrants in her country during a massive intake of Syrian refugees, pressed again.

Zuckerberg replied, ‘yeah’, before a speaker at the event on Saturday in New York made the rest of the conversation inaudible.  …..

… ‘We are committed to working closely with the German government on this important issue,’ Facebook spokesman Debbie Frost told Bloomberg.

‘We think the best solutions to dealing with people who make racist and xenophobic comments can be found when service providers, government and civil society all work together to address this common challenge.’

Merkel’s desire to push Facebook to greater control over the information on its website comes as her administration says it would welcome 800,000 refugees from the war-torn Middle East this year.

However some Germans, particularly some in the ex-communist eastern part of the country, have opposed the move to assuage the humanitarian crisis by taking in the refugees. …..

For those unaware, Merkel invited a Muslim invasion of Europe.  The majority of the immigrants/invaders are not Syrian, but, are coming from all over the Muslim world.  The majority of the immigrant/invaders are young adult males.  This isn’t a humanitarian effort, it’s a transformation effort.  The havoc wreaked by this insanity has already caused Hungary to close their borders (they were the best route to Germany).  Many of the Balkan states have been overwhelmed and have stated that they can’t keep the invaders.  Millions of them have poured into Europe.  Riots break out on a seemingly daily basis.  France and Britain are having great difficulty dealing with the influx of these people.  We’re watching the destruction of the cradle of Western Civilization.

Merkel is seeking to silence people who wish to preserve their civilization and nation.  Mark Zuckerberg is happy to help!

You know, I despise racists.  But, I would much rather demonstrate the errors of the racist’s thoughts rather than attempt to silence them.  You can’t win, otherwise.  It’s simply a form of segregation.  You can’t stop people from thinking thoughts, and you can’t stop them from expressing said thoughts.  The only thing you can do is to present more rational thoughts as an argument.  You can’t have an argument if your opponent can’t speak to you.

Zuckerberg seems to think he’s the only social media game in town.  He’s not.  And, a better site is on its way, I can assure you.

There is one thing I despise more than a racist, that’s a person who would attempt to set themselves up as the arbiter of what is and isn’t racist or xenophobic.  They can go to hell.  ……  It is intolerable that Merkel and Zuckerberg would seek to use the internet as a tool for government sponsored censorship.  But, you expect that from totalitarian jackbooted thugs.

14 Responses to Facebook To Do Censorship For Governments One Nation At A Time!!!!!