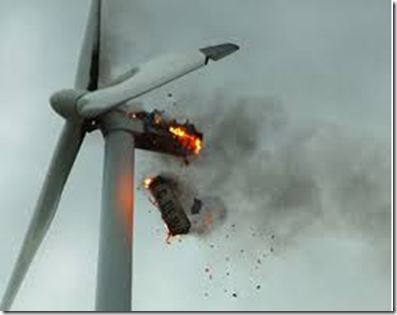 Well, I’m certainly not the only one to write extensively about these issues, but, I used to write about them often.  I’ve slowed down on doing it, because, I’m mostly preaching to the choir, here, and it seems to fall on deaf ears for anyone else.

At Townhall, we see this ….

A study released Tuesday morning concludes that the true cost of wind energy is 48 percent high than previous studies have estimated.

The study titled, “The True Cost of Energy; Wind,” was conducted by the Institute of Political Economy at Utah State University, and given to Townhall exclusively. They came to this conclusion by looking at implicit costs that a variety of other studies — including studies from the Department of Energy and the Institute for Energy Research — did not account for.  ……

Now, before anyone jumps to conclusions, the “implicit costs” referenced here are not the same as the imaginary health costs the lunatics associate with the imaginary global warming issue, although, it is briefly addressed.

The implicit costs referenced here are ….. well, I’ll let them communicate it ….

Of course, each of these issues have been addressed here, and many, many other places on the net.  More from Townhall ….

And yet, despite the PTC, wind makes up only 4 percent of national energy consumption. As the authors of the study say, this is the true cost of the subsidies (emphasis mine):

By paying for the PTC with their taxes, American citizens subsidize private investments in wind energy development. Wind and solar energy both receive 20 times more federal subsidies than coal or natural gas in terms of average electricity generation. Since it was expanded in 2009, the PTC has cost an average of $5 billion per year. Recent IRS changes expanded the number of wind producers and the conditions for eligibility so that a one-year extension is expected to cost taxpayers approximately $13 billion over the next decade.24 These considerations increase the true cost of electricity produced from wind power. While the costs of subsidizing wind power are dispersed across all Americans, the benefits are enjoyed by a select few wind industry favorites.

Without the PTC, many private investors would have no incentive to invest in wind energy because such investments would no longer be profitable. Warren Buffett, who has invested billions in renewable energy, stated, “[W]e get a tax credit if we build a lot of wind farms. That’s the only reason to build them. They don’t make sense without the tax credit.” Thus, when the PTC is allowed to expire, investments in wind energy plummet.

This leads to a phenomenon known as negative pricing, where the seller pays the buyer to accept their product. Wind farms need to pay utilities to take electricity since wind is at its most powerful in the evenings, when most people are not using energy. This negative pricing distorts the market:

The PTC pays wind producers $23 for every megawatt-hour of electricity produced, regardless of market factors like supply and demand. Wind producers can then pay utilities (up to $23 per megawatt-hour) to take their power while still making a profit or at least breaking even. Subsidies, and the negative pricing they cause, distort the market for electricity and flood it with subsidized wind power. In some cases, this drives more conventional producers of electricity, such as nuclear plants, out of the market.

And this creates opportunity costs, meaning that the resources spent on the wind energy sector could have been instead on resources that were of higher value to the market.

WHAT IS THE TRUE COST OF ENERGY?

What is meant by the term “true cost”? When calculating the cost of any energy source, there are many factors to consider. For example, it goes without saying that the costs of construction, operation, and maintenance of the power plant must be considered. The cost of transmitting the power to the consumer must also be factored in. However, not all costs are so easy to identify. The true cost of an energy source also includes hidden costs such as opportunity cost and other, less-obvious factors.

Proponents of wind energy claim that it is superior to traditional forms of power generation such as coal and natural gas. They claim that wind energy is cheaper to produce and it is renewable. Sometimes, when cursory and incomplete cost accounting is used to calculate wind energy’s costs, these claims appear to be correct and wind energy appears to be not only advantageous to consumers, but also friendly to the environment.

The true cost of wind power, however, is what consumers and society as a whole pay both to purchase wind-generated electricity and also to subsidize the wind energy industry through taxes and government debt. The true cost includes both traditional cost accounting and the seen and unseen costs of policies that seek to artificially bolster renewable energy development and production. When examined more closely, many claims about wind energy are found to be indefensible.

To more closely examine the true cost of wind energy, this report will discuss in detail aspects of wind energy that are often overlooked, aspects which lead to dramatic underestimation of the true costs of producing electricity from wind. These include the cost of massive government subsidies and mandates to incentivize development and production of renewable energy. They also include the costs of building transmission lines to the often-remote locations where wind power is plentiful. As important but more difficult to quantify are the costs of reduced reliability. Wind energy distorts the market and drives more reliable energy sources out. Finally, the true cost of wind must also include opportunity costs paid by taxpayers, whose money could have been spent more productively than subsidizing the wind industry. …

Regardless of how cost factors are considered, the true cost of wind energy in the United States is, on average, 48 percent higher than most estimates claim. This is because generating electricity from wind power entails many hidden costs. A true estimate of the cost of wind power to the American public must account for the following factors:

The federal PTC, a crucial subsidy for wind producers, has distorted the energy market by artificially lowering the cost of expensive technologies and directing taxpayer money to the wind industry.

States have enacted Renewable Portfolio Standards (RPS) that require utilities to purchase electricity produced from renewable sources, which drives up the cost of electricity for consumers.

Wind resources are often located far from existing transmission lines. Expanding the grid, whether by private or public funding, is expensive, and the costs are passed on to taxpayers and consumers.

Because wind power is unreliable, conventional generators must be kept on backup to meet demand when wind is unable to do so. This drives up the cost of electricity for consumers, as two plants are kept running to do the job of one.

Billions of taxpayer dollars are used to subsidize the wind industry. Allowing consumers to pick which energy to use, based on price, would result in greater economic efficiency than allowing government to decide how the resources of consumers should best be allocated.

The true cost of wind energy is higher than most cost estimates calculate. Mandates requiring the use of wind energy increase electricity costs for consumers, and subsidies mask the actual cost of doing so. RPS require intermittent renewable energy to exist, but at the expense of utilities and consumers. The PTC makes wind power cheaper for utilities and consumers, but at the expense of taxpayers.

Through such policies, U.S. policymakers have essentially decided that electricity consumers will have wind power, even if it is more expensive. The cost of this decision has fallen to U.S. taxpayers and consumers of electricity. When weighing the costs and benefits of wind power, not including all of the hidden costs makes wind power appear to be a more attractive option than it actually is. Energy policy decisions, however, should be based on a more complete estimate of the cost of wind energy.

It’s a nice read, though, not bringing anything which we didn’t already know.  But, it’s nice to read validation of our thoughts from time to time.  Better, the study puts much of it in plain language, so about 25% of the leftards/ecotards can understand what it’s saying before they summarily dismiss the findings.

I probably should expound on what I’m about to write, but, I’ll leave it for another day.

This entry was posted in Climate, Economics, Energy. Bookmark the permalink.