So …. We’re Charging The Person Blackmailed …. The Extortionist? 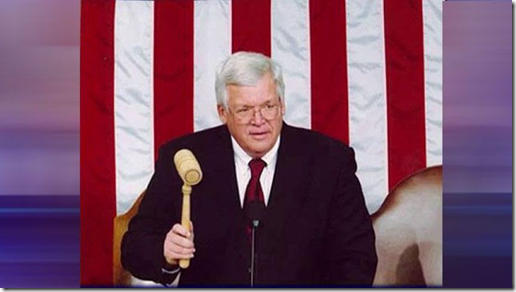 Don’t get me wrong, I was never a fan of Hastert.  But, all of this seems a bit backwards to me.

Ex-House Speaker Dennis Hastert had been paying someone to cover up sexual misconduct before he was indicted for allegedly concealing those payments, a law enforcement source told Fox News Friday. ……

… The federal indictment said only that Hastert had been hiding payments he made in order to compensate for and conceal “prior misconduct.”

It said he agreed to provide $3.5 million to someone described only as “Individual A.” It did not elaborate on the alleged misconduct or indicate if Individual A is a man or a woman. However, it said the person has known Hastert most of the individual’s life. It also said the person has been a resident of Yorkville, Ill.

The 73-year-old Illinois Republican is specifically accused of structuring the withdrawal of $925,000 in cash in order to evade the requirement that banks report cash transactions over $10,000. He is also accused of lying to the FBI about the withdrawals. ….

…  A C-SPAN clip that surfaced from a 2014 “Washington Journal” segment fanned the flames. It showed Hastert responding to a caller identified as “Bruce.”

The caller greets Hastert and then says, “Remember me from Yorkville?” He then laughs and hangs up.

The indictment said the misconduct in question began “years earlier” and seemed to suggest it was back in his teaching days, introducing Hastert from the outset as having worked as “a high school teacher and coach in Yorkville, Illinois,” from 1965 to 1981.  …..

And, “Bruce”??? The guy extorting money?  Last I checked, extortion was a crime.

Again, don’t get me wrong, I was never a fan of Hastert, and I won’t shed any tears if he goes to prison.  But, the guy was being blackmailed.  I always considered blackmailers to be of a worse sort than people who hide payments from the government.

We all know banks are required to alert the feds every time there are bank transactions over $10,000.  But, then, we now see the feds are also on alert for transactions for less than $10,000 … meaning there is no personal bank transaction you can have without the scrutiny of the federal government.  Nice.

4 Responses to So …. We’re Charging The Person Blackmailed …. The Extortionist?