Imbeciles Don’t Understand What This Means!!! Recovery Is “Durable”!!!! 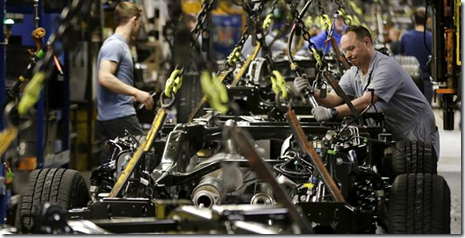 US economic growth may be mild, but it’s also really durable

WASHINGTON (AP) — The U.S. economy’s tepid performance last quarter — a 2.2 percent annual growth rate — was typical of the economic rebound that began in the summer of 2009. Yet the sluggish pace of the recovery has a silver lining: This growth spurt has proved to be one of the most durable since World War II.

Will it last? It’ll depend on a number of factors in the months ahead, including a potential rate hike by the Fed, the strong dollar, oil prices and consumer spending.

The economy’s performance in the October-December period matched the average growth of the past five years — a lackluster pace that has been far lower than the growth gains normally seen coming out of such a deep recession.

But like the turtle versus the hare, slow and steady may win the day. The current expansion will mark its sixth anniversary in June, meaning it will have already lasted 14 months longer than the average expansion since the end of World War II. Before the war, periods of expansion tended to be shorter and the economy more volatile. …….

Duration of post-WWII US economic recoveries, at a glance

WASHINGTON (AP) — The expansion of the U.S. economy will hit its six-year mark in June. Though growth overall has generally been mild, this recovery has proved to be one of the most durable and steady periods of growth since World War II.

At 69 months (assuming it endures through March) and counting, this recovery is the fifth-longest since World War II and sixth-longest since record-keeping began in the 1850s.

The longest recovery on record was the 10-year period that lasted from March 1991 until March 2001, according to the National Bureau of Economic Research, which officially determines the beginnings and ends of recoveries and recessions.

Below are the U.S. economy’s previous cycles of expansion in the post-World War II era:

Well, first of all, they’re using GDP as a euphemism for our economy, it most certainly is not the same thing.  My next sentence will clarify …. They’re also counting the Nixon recessions and the subsequent Carter spiraling inflation disaster as two separate events.  Anyone who lived through the Carter years knows we had a horrid economy during that time.  These morons are counting that as a “recovery”.  I would also beg to differ about them separating the 1982-2001 “recovery”, it should be one long period in that as I recall, there was only one quarter with Bush Sr. in which we had a negative GDP growth rate ….. but, that’s all moot as they’ve recalculated how we actually determine our GDP, in which, with the new calculation, we didn’t have any negative GDP growth rate quarters with Bush Sr.

So, the story, and the meme is bs.  However, there are certain things we can glean from this bs.  My objections notwithstanding, we can see that we do, indeed, have certain periods of recession in the US economy.  This is natural.  As alluded to, but, not really detailed, we also have substantial growth after the periods of recession.

Because I’m a show and tell type of guy, I’ll chart our GDP rate so people can see the details.

About the graph, the numbers are pulled directly from here, which is explained in this manner …

Source: US Bureau of Economic Analysis

Note:  For some reason Excel wasn’t cooperating with the dates.  They should read 31 Dec and then the year.  The data is up to and through 2014.

Now, look at the recessions and look at the growth rates afterwards.  Prior to this mess, we never failed to get above 4% for an entire year.

The point is, we’re running out of time.  We can be sure we will have another recession, and pretty soon.  It’s simply the natural occurrence with the US economy.  But, we’ve never grown out of the last recession.  We never had our great bump to get us back on track!

I’ve gone into more detail in the past, so I’ll just reiterate, 2% GDP growth rate isn’t growing our economy at all.  3% is treading water.  We need our bump up!  We’re not going to get our bump.  But, we’ll most certainly see another recession.

2 Responses to Imbeciles Don’t Understand What This Means!!! Recovery Is “Durable”!!!!