On A Personal Note …… Computers! 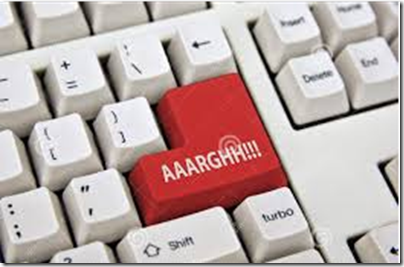 From time to time, I’ll contract with a tech company which contracts with other people who contract with companies which need some IT grunt work.  I typically do it so my wife can have a little spending money as she’s the one they usually contact.  Yeh, it’s weird, but, it really does work that way.  Even if the company has a huge tech support dept with a huge WAN.

So, my wife and I set out to do a little upgrading of a remote site, not very far away.  This place was moving from Win XP to Win 7 …… cake!  NBD!!!!  They even printed us very specific step by step procedures!  And, we’re to follow those procedures, and that’s it!  ……. Well, in these sort of things, one must always expect some issues.  This one was no exception.  Apparently, of all of those people, from the IT of the company to the contracting people,  none of them had bothered with such silly notions as “compatibility” issues, or legacy software, even if the software was mission critical.  101 different flavors of network printers with no driver location on the network?  Who does that?  What?  We didn’t test to see if IE9 was 100% compatible with the web app every person in the company uses?  Oh, okay.  2003 era barcode printers?  Why wouldn’t they work with Win 7?  Seriously, one person we upgraded literally had a floppy disk in the A: drive!  But, we had this really cool program which ported the person’s files and whatnot over to the new PC.   Two 12 hour days and I’ve got to go back to work my real job, but, we’re still not done.  But, who gets the grief?  Saps such as myself, when the end user looks at you with disdain because you broke their scanners.  Oh, and why not schedule this company wide so we can drop the net to a slow crawl while all this is going on?  Did I mention they all had to use a web app ran from their WAN servers?  Did I mention we ported the persons files and data via the very same network?

Well, that’s my whine for the day.  But, seriously, who does that?

This entry was posted in Uncategorized. Bookmark the permalink.

7 Responses to On A Personal Note …… Computers!