Starbucks Is Hated Because People Would Rather Bitch Than Talk!!!!!

This is so telling.

Now, don’t get me wrong, I’ve bought coffee at Starbucks once in my life.  Once.  I can’t imagine ever doing it again, though, this story did make me consider it …. very briefly.

For those who may not know, Starbucks is a place where pretentious people go to pretend to drink real coffee.  Typically, they’re drinking some sweetened cocoa, instead of real coffee, but, they’re paying a very high premium for the rather bland coffee/cocoa.

Starbucks decided to try to have people engage in a racial conversation, and started a “#RaceTogether” campaign.

Starbucks is faced an onslaught of criticism for its latest campaign to promote awareness about racial issues.

On Monday, the company published a letter from CEO Howard Schultz explaining the new campaign and made public a video that had been shared internally with the coffee conglomerates’ 200,000 plus employees. In the clip, Schultz urges baristas to further discussions on racial tension across the country by writing #RaceTogether on cups and allowing curious customers to engage in conversations surrounding the hot button issue.

Many people, including twitter users, immediately took issue with the campaign –calling the chain hypocritical for only including hands and faces that appeared to be white in promotional photographs. Some decried the billionaire Schultz for his misguided efforts as a “1%-er” while others said a serious conversation about race doesn’t happen while grabbing a coffee before rushing to work.

#RaceTogether is what happens when a 1%-er without any actual anti-racist education or training has a mid-life “white man’s burden” crisis. 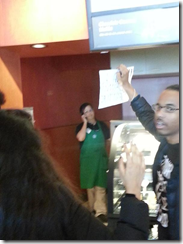 Hmm this @Starbucks mgr not so keen on the new #RaceTogether campaign. Seen here calling cops on #blackbrunchseattle

Not sure what @Starbucks was thinking. I don’t have time to explain 400 years of oppression to you & still make my train. #RaceTogether

The bitching was so strong the Starbucks vice president of communications Corey duBrowa deleted his Twitter account.  He, later, undeleted the account to face more hate and vile vitriol for Starbucks having the audacity to wish to have a useless conversation about race relations in the US.

Here’s my conversation about race relations in the US ……..

STFU!!!!!  I’m sick of this stuff!  Quit crying!!!!  No, seriously, quit crying!  I’m sorry about your vaginitis, but, that’s not something I’m going to try to help. Who, exactly, is oppressed, today?  What race?  I’m living in a nation which elected a “Black” president, twice.  There’s a “Black” Supreme Court justice sitting in the only body which is more powerful than the POTUS.  We actually have congressional representatives who will not caucus with the CBC (congressional Black caucus) because of the diversity of each’s advocacy.

Stop crying, stop whining!  I can’t stand people wallowing in self-pity.  Stop doing that!  Things suck for you?  Well, I’m sorry to hear that.  Especially given all that me and mine did to make things better for you.  Turns out, things suck for me, too!  But, I don’t get Starbucks wanting to have a conversation about why things suck for me, or anything about me ….  maybe I should identify as a race and, then, by golly, I could really, really bitch about stuff.  Then, I could hate on someone wanting to have a conversation about the stuff I was bitching about!!!!

And, this is my message to my fellow citizens.  GET OFF YOUR KNEES!!!!!  QUIT CRYING!!!!  QUIT BITCHING!!!!!  Do something.  I mean, something other than crying and bitching.  It’s unbecoming of an American.

Sure, Starbucks is lame.  And, their campaign is lame.  But, there’s no reason to hate on them!  STOP CRYING!!!!

15 Responses to Starbucks Is Hated Because People Would Rather Bitch Than Talk!!!!!