Sigh ……. I Wonder What It’s Like To Have A Majority Leader With A Backbone? 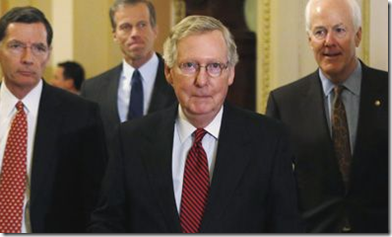 Senate Majority Leader Mitch McConnell on Tuesday offered a new plan to potentially break the impasse over legislation to fund the Department of Homeland Security — but it remained unclear whether the plan could clear Congress before a looming funding deadline.

Democrats have long said those issues should be addressed separately. On Tuesday, McConnell agreed to that demand, and said he would split the issues into two bills.

“I’ve indicated to the Democratic leader that I’d be happy to have his cooperation to advance a consideration of a clean DHS bill,” McConnell said, referring to legislation that would fund the department without any immigration provisions attached.

He added: “I don’t know what’s not to like about this.”

Under McConnell’s plan, the Senate would vote on a DHS funding bill, and also vote on a separate bill to unravel Obama’s November immigration actions. Those executive actions would allow millions of immigrants in the country illegally to live and work in the U.S. without fear of deportation.  …..

Read more at the link.

Essentially, he’s throwing the House under the bus.

Now, mind you, I didn’t like the strategy to begin with.  It’s ending exactly as I said it would.  But, sometimes, you have to stay the course, if for nothing else, to prove you’re willing to stand your ground.  McConnell, OTOH, has shown that he’s unwilling, and caves at the first opportunity.

What will the House do, knowing the Senate isn’t standing by them?  Two guesses and the first one won’t count against you.