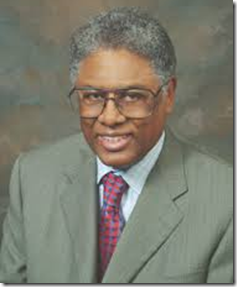 So, the fellow picture above, Thomas Sowell had this article I read today ……

Some of us, who are old enough to remember the old television police series “Dragnet,” may remember Sgt. Joe Friday saying, “Just the facts, ma’am.” But that would be completely out of place today. Facts are becoming obsolete, as recent events have demonstrated.

What matters today is how well you can concoct a story that fits people’s preconceptions and arouses their emotions. Politicians like New York mayor Bill de Blasio, professional demagogues like Al Sharpton and innumerable irresponsible people in the media have shown that they have great talent in promoting a lynch mob atmosphere toward the police.

Grand juries that examine hard facts live in a different world from mobs who listen to rhetoric and politicians who cater to the mobs.

During the controversy over the death of Trayvon Martin, for example, a member of the Congressional Black Caucus said that George Zimmerman had tracked Trayvon Martin down and shot him like a dog. The fact is that Zimmerman did not have to track down Trayvon Martin, who was sitting right on top of him, punching him till his face was bloody.

After the death of Michael Brown, members of the Congressional Black Caucus stood up in Congress, with their hands held up, saying “don’t shoot.” Although there were some who claimed that this is what Michael Brown said and did, there were other witnesses — all black, by the way — who said that Brown was charging toward the policeman when he was shot.

What was decisive was not what either set of witnesses said, but what the autopsy revealed, an autopsy involving three sets of forensic experts, including one representing Michael Brown’s family. Witnesses can lie but the physical facts don’t lie, even if politicians, mobs and the media prefer to take lies seriously.

The death of Eric Garner has likewise spawned stories having little relationship to facts. The story is that Garner died because a chokehold stopped his breathing. But Garner did not die with a policeman choking him.

He died later, in an ambulance where his heart stopped. He had a long medical history of various diseases, as well as a long criminal history. No doubt the stress of his capture did not do him any good, and he might well still be alive if he had not resisted arrest. But that was his choice.

Despite people who say blithely that the police need more “training,” there is no “kinder and gentler” way to capture a 350-pound man, who is capable of inflicting grievous harm, and perhaps even death, on any of his would-be captors. The magic word “unarmed” means nothing in practice, however much the word may hype emotions.

If you are killed by an unarmed man, you are just as dead as if you had been annihilated by a nuclear bomb. But you don’t even know who is armed or unarmed until after it is all over, and you can search him. ……

There’s more to read at the link, and please do, if just to give click props.

Why do I like this so much?  Well, one is because Thomas Sowell is probably one of the brightest minds in America.  He’s absolutely brilliant.  But, two, is because readers of Suyts were treated by being a couple of steps ahead of this bright mind!

The Truth Will Set You Free!!!! —– Why I Will Not Support The Hoodie/Hands Up/I Can’t Breath Lunatics Protesting …… It’s A Bunch Of Lies!!!!

It’s been said, millions of times over, the truth will set you free.  There’s nothing truer than this statement.  It is true in a spiritual sense.  Christ is the Truth and Christ will free you.  It is true in the intellectual sense.  One can not learn anything without first considering what is the truth.

But, these are abstract ideas for most people.  Truth, though, is concrete.  It is immutable.  Truth is the anchors of all anchors.  In the constant world of lies, there is only one hold which can save us, it is the Truth. Truly, we are not bound by the life line of Truth, for all we have to do is to release our grip on Truth.  It is easily done.

But, if Truth is our freedom, then, lies are our chains, our bondage.

All of what I pictured above is part of a lie.  For those who would attempt to excuse the lies to forward a “greater truth”, I would answer that a truth cannot be founded upon lies.

As a person who cries and tries for the downtrodden, I’ve attempted to see what the uproar was about.  And, I do.  It’s about lies. …..

Rich Lowry And The LA Rams —- Facts Vs Imaginary Boogymen

Well, we do have to take the time to bask, from time to time!

But, there is a larger point than just these few stories.  It is that everything the left does, and tells you, is based on a lie, or is an outright lie.

Earlier this month, I wrote a post about the environmental nutjobs and everything they tell you is a lie.  But, then, the supposed “green” lunatics are an arm of the left, so, we know this, already.

A few days ago, my daughter, who is back for a brief time from studying for a dual masters, and I were having a conversation about the abhorrent state of academic papers.  While hers was focused on the social sciences, I, of course, had more of a focus on supposed hard sciences.  It’s funny, to quote her, it was a “circle jerk” group of people which re-affirm each other from same circle jerk.  She concluded that peer review was of no meaning.  This is fantastic, because while she was at home, I never really engaged with her about my experience with climate science.  It was her own conclusion, without my input.

Everything the left tells you is a lie.  The left includes academia, LSM, and environmentalists, many economists, and most politicians and supposed scientists of various schools of learning.