Breaking!!!! Aviso Advises Downhill Skiing Still Available In The Middle Of The Oceans!!!! 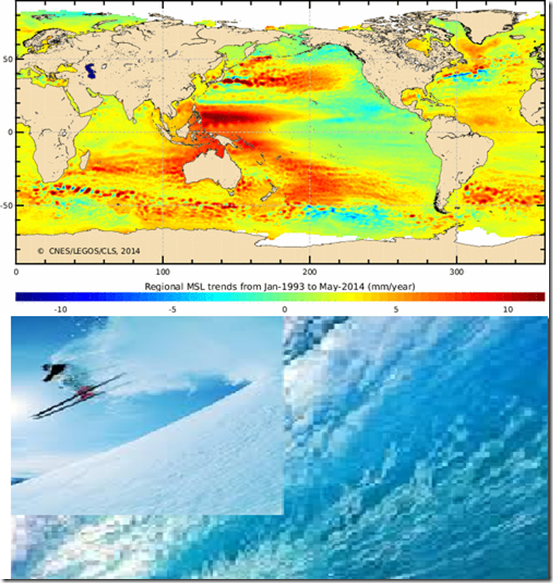 Just east of the Philippines and east of Japan, we’re told it’s the best!  And, the water continues to grow, right there!!!!

I hear Aviso is advising people not to attempt downhill skiing east of the US, where the water is continuing to ……. submerge?  There are no lifts out there to carry one out of the deep depressions!  Well, that’s what I heard, anyway.

Landerer also is a coauthor of another paper in the same Nature Climate Change journal issue on ocean warming in the Southern Hemisphere from 1970 to 2005. Before Argo floats were deployed, temperature measurements in the Southern Ocean were spotty, at best. Using satellite measurements and climate simulations of sea level changes around the world, the new study found the global ocean absorbed far more heat in those 35 years than previously thought — a whopping 24 to 58 percent more than early estimates.

That was from an article reference a stuy done with actual measurements, which show there hasn’t been any deep ocean warming.

So, essentially, what they’re saying is that the oceans ate our warming that we’re missing now, while it wasn’t missing.  And, they determined that with absolutely no data.   You see, it was warming when no one could see it.  But, now that we have some measurements, it doesn’t show any warming.

14 Responses to Breaking!!!! Aviso Advises Downhill Skiing Still Available In The Middle Of The Oceans!!!!