OTOH ….. Sometimes, There Are No Differences Between Repub And Dim … House Votes To Arm “Moderate” Militants 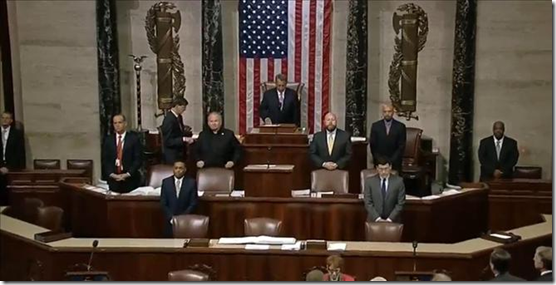 The continuing resolution to fund the government through December 11thpassed easily in the House of Representatives this evening with a vote of 319-108 and is now headed to the Senate. Per Fox News’ Chad Pergram, 53 Republicans and 55 Democrats voted down the measure, which also authorizes the president to train and arm “vetted,” moderate Syrian opposition for the purpose of providing ground troops in the war against ISIS.

I despise this sort of madness.  Continuing the funding of our government has nothing to do with arming “moderate” militants.  But, there we go, tying the both together.  So, if one votes against the measure, people will say they voted against funding the government.

But, it’s idiot Repubs who did this.

Why are we pretending that we didn’t already arm “moderate” militants to fight Assad?  We absolutely did.  And, this is where ISIS got their weapons.

But, just to be clear on this

THERE’S NO SUCH THING AS A MODERATE ISLAMIC MILITANT!!!!!!!!!

In my lifetime, this has been proven over and over again.  Since even before the time of Reagan.

I don’t blame the naivety of people in the past. I’ll give them the mulligan.  Even though, there were sure signs back then.  But, today, there is no excuse.

We’re told there are peace loving Muslims.  I’ve no doubt there are.  I once knew a few.  How many have died because we armed the “moderate” militants?

16 Responses to OTOH ….. Sometimes, There Are No Differences Between Repub And Dim … House Votes To Arm “Moderate” Militants