Breaking!!!! Zero The Sunni To Kick ISIS Ass Like We Did al-Qaeda!!!! 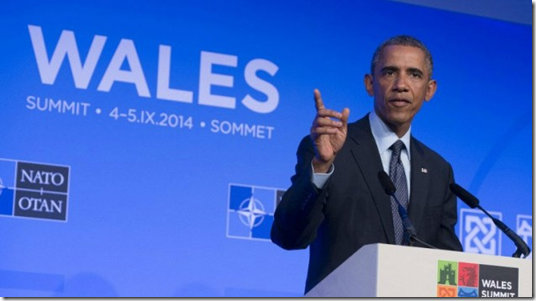 Yeh, AQ has been kicked so hard they had to expand to things like ISIS and Boko.

Obama: We will defeat ISIS like we did al-Qaeda

US President Barack Obama said Friday he was confident he could gather a broad international coalition to defeat Islamic State extremists in Iraq and Syria, following two days of talks at the NATO summit.

“I leave here confident that NATO allies and partners are prepared to join in a broad, international coalition,” Obama said after a meeting of the Western military alliance in Wales. “We’re going to degrade and ultimately defeat ISIL (IS’s previous name) the same way we’ve gone after al-Qaeda,” he said.

Suddenly, I’m not confident Zero will be successful in his stated effort.

Either Zero is the most delusional idiot in the world or he’s the world’s most idiotic Sunni.  I don’t know which.

Following the beheading of two US journalists by the Islamic State, which has overrun swaths of northern Iraq and Syria, Obama said there was “unanimity” among NATO members that the group “poses a significant threat”.

Obama cautioned that “it’s not going to happen overnight”, but “we’re going to achieve our goal.

Well, not literally overnight, but, why not?  How long did it take us to run through Saddam’s Iraq?  Kaddafi’s Libya?  We know where the bastards are, and if we don’t, we damned sure know the Shia, Kurds, and Christians do!

That’s nothing but Sunni double-talk!  Ask the Israelis!!!!  I know they know where they are!!!  Are we to believe they’re more powerful than Saddam’s Iraq?  They don’t have the munitions, supply lines, numbers, or armaments Iraq or Libya had.

You know, I try not to be cynical, but, this is too much.  There’s no reason why these SOBs won’t be a thing of the past next week.  The US doesn’t even have to be involved.  The UK can easily do this.  Australia can!  Canada can!  France …. well, that might take a bit longer, but, still!!!!

US Secretary of State John Kerry will travel to the Middle East to seek support of regional powers, Obama said, insisting that Arab involvement was “absolutely critical”.

Yeh, well, I think Arab involvement is something which has already happened.

IS caught the world by surprise when it made huge territorial gains and declared an Islamic “caliphate” in an area straddling Iraq and Syria countries. …..

European allies, while supportive of the US initiative, are proceeding with caution.

Britain has left the door open to air strikes in Iraq, but Prime Minister David Cameron played down the prospect of any immediate action.

“This will take time, patience and resolve,” he told reporters at the end of the summit.

“We will proceed carefully and methodically, drawing together the partners we need, above all in the region, to implement a comprehensive plan.”

President Francois Hollande said France was ready to join a coalition against IS militants in Iraq, but warned it would not commit to actions in Syria that might aid President Bashar al-Assad.

German Foreign Minister Frank-Walter Steinmeier stressed the effort was at an early stage.

“We are at the beginning in dealing with a group which nobody has a strategy to deal with in the long run,” he told reporters.

NATO Secretary General Anders Fogh Rasmussen said the military alliance was willing to help if there was a request from Baghdad, likely providing training and coordination with other countries’ efforts against IS.

Rasmussen said he “warmly welcomed” efforts by the US and its allies, adding: “I think the international community has an obligation to do all it can to stop this dangerous terrorist organisation.”

He said NATO nations had also agreed to exchange more information on foreign fighters returning from Iraq and Syria to Europe and the United States, due to fears they will carry out attacks on home soil.

Pressure to act has intensified since the executions by IS of two US journalists in videos showing a militant speaking in British English and threats that a British hostage would be next.

Cameron said NATO leaders were “united in condemnation of these barbaric and despicable acts”.

In a further reminder of the brutality in Iraq, Iraqi Kurdish forces and Shiite militiamen on Friday discovered mass graves containing 35 bodies after retaking the town of Sulaiman Bek from jihadists.

The “long run” ????  What’s the “long run” vs the “short run”?  Hunt the bastards, and kill them where you find them!  After they cease to exist as an organization, then you do what we did with the Nazi’s and continue to hunt them and try them and kill them or jail them for life. This isn’t a hard question.

28 Responses to Breaking!!!! Zero The Sunni To Kick ISIS Ass Like We Did al-Qaeda!!!!