Mexican President Thinks US Is Other Mexico!!! 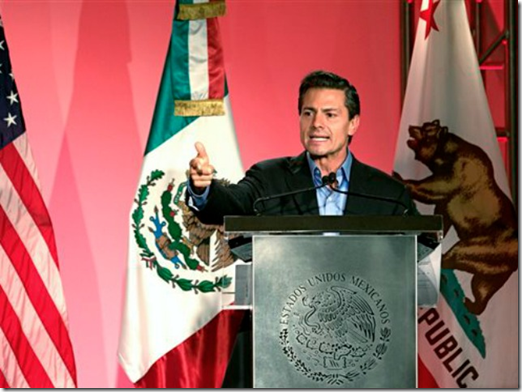 Here’s a story I’ve been holding on to for a couple of days …….

Forget so-called “Mexifornia.” How about the United States of Mexico?

On Monday, Mexico President Enrique Peña Nieto called on other states to “evolve” like California so the United States can be more like his home country.

“This is the other Mexico,” Peña Nieto reportedly “said of the United States, which is property to an estimated 11 million Mexican immigrants,” according to the Los Angeles Times.

“There are still states that have not evolved so much as California, that still skimp on recognition and, even worse, the rights of immigrants,” Peña Nieto said, according to the Associated Press. “Those who still believe and bet for the exclusion and discrimination or the rejection of diversity … I only have one thing to say: the future, and a very near future, will demonstrate your ethical mistake. Time will show we’re right.”

Though Peña Nieto did not offer to help those governments absorb illegal immigrants in their communities and schools, he did reportedly promise scholarships for DREAMers and, “during the ceremony, a group of students from Mexico was awarded scholarships to attend California universities including UCLA, Cal State Northridge and Cal State Long Beach.”

According to Pew Research, a “record 33.7 million Hispanics of Mexican origin resided in the United States in 2012,” and that estimate included “11.4 million immigrants born in Mexico and 22.3 million born in the U.S. who self-identified as Hispanics of Mexican origin.” Mexicans accounted for “nearly two-thirds (64%) of the U.S. Hispanic population in 2012” and made up roughly 28% percent of all foreign-born residents in the United States.

Yeh, well, pinhead Peña, in a nation where only a little more than 10% of the population is of Mexican origin, I’d say you’re a little off in your declaration that this is another Mexico.  And, more than that, we don’t want to be a failed little nation barely making 2nd world status.

And, you say other states haven’t “evolved” like Cali?  I believe the  proper word would be “devolved”.  Look at the mess Cali is!!!  It once was a jewel of the US!

Here’s something for predictions, in the very near future, we’re not going to have an anti-American coward in office.

13 Responses to Mexican President Thinks US Is Other Mexico!!!