It’s a fairly technical post, and to be sure, it does illustrate some problems.  But, I want to focus on what I believe should be more obvious problems.

To give you some insight to the gravity of this, I’ll quote a paragraph from the post……

Most researchers who have examined pre-1958 relations between GHGs and temperature have used Antarctic ice core data provided by Etheridge et al (1996) (henceforth Etheridge). Etheridge measured the CO2 concentration of air trapped in the ice on Antarctica at the Law Dome, using three cores that varied from 200 to 1200 meters deep.

And, this is true.

But, there’s a problem with this.  Well, there’s lots of problems with this.  First of all, we have to pretend all of the ice moves uniformly in lock-motion with all the other ice in the Antarctic.  If we don’t pretend this, then all of the chronology of the ice cores are of no value.

Another problem we have is that our surface CO2 levels vary greatly, and seems to have no particular relationship with the atmospheric CO2 levels. 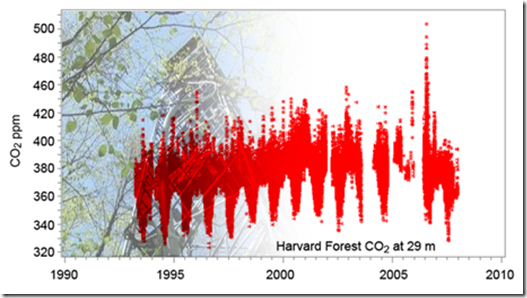 Notice the decline in the more recent years?  That’s converse to what we’re told our atmospheric CO2 levels were doing.  And, that’s at 29 meters high.  The ice cores are samples of surface CO2 which got trapped in the ice.  It isn’t related to atmospheric CO2.

Worse, at what point did people decide to pretend CO2 levels in the Antarctic were representative of global CO2 levels?  It isn’t.  In spite of what the pinheads model and spew, our CO2 isn’t well mixed.

Watch the lower part of the screen in the vid.

But, nutters and, sadly, some skeptics simply conflate the numbers as if they represent the same thing.  THEY DO NOT!!!!