So, to catch people up with historic events. …….

Back in the day, we had 3 sea-level monitoring satellites in the sky, Envisat, Jason I, and Jason II.  Jason II was newish and didn’t have the historical measurements Envisat and Jason I did.

At one time, Envisat had reported 6 1/2 years of declining sea-levels.  Jason I, meanwhile, started to record the decline, as well.  So, together, they both recorded declining sea-levels for 3 1/2 years.  Jason II was also recording declining sea-levels.  And, so, the lunatics killed Envisat and Jason I.  They simply died and quit reporting ….. after the Envisat data was adjusted so as to show rising sea-levels, as opposed to what it had shown for 6 1/2 years.  Then, miraculously, Jason I sprang back to life!!!  Only, Jason I was unrecognizable to the old Jason I.  Apparently, the lunatics felt they could fix “Jason I”, rather than have to bury it like they did Envisat.

I mocked them at one point, because this is what they showed as Jason I measurements. 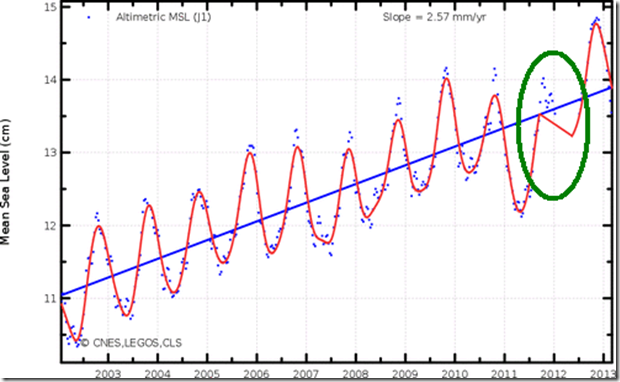 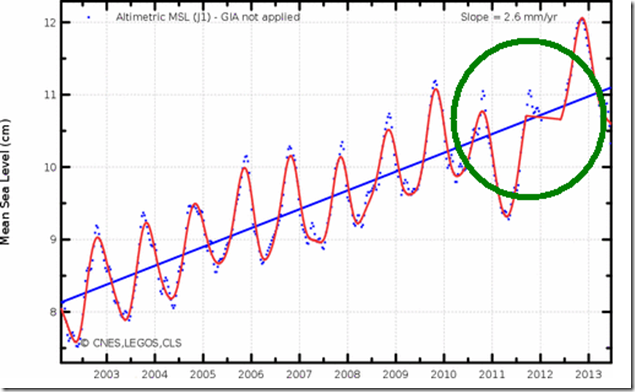 If you hurry, you can see the same graph here, at the official site.  Oddly, I can’t find the old numbers they used to use.  They took a page from NASA and simply write over the old numbers and pretend they never happened.

Anyone who lends any credence to the satellite measurements of our sea-levels are either incredibly naive, willfully ignorant, or simply dishonest.