Saaayyy ….. Was That Just Wishful Thinking? Leftards Wondering If The Demise Of The TEA Party Was Overstated

MSNBC’s Chris Jansing: ‘Was The Demise Of The Tea Party Overstated? 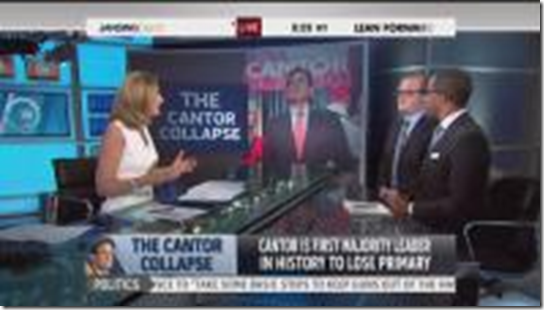 It seems that with the Virginia Republican primary victory of Tea Party candidate Dave Brat over House Majority Leader Eric Cantor has proven to the liberal media that despite their exaggerated reporting, the Tea Party isn’t actually dead. When Chris Jansing asked if “the demise of the Tea Party was overstated,” McKay Coppins of Buzzfeedreplied: “I think so.”

Two weeks ago after the last round of GOP primaries, the liberal media hyped the results as the death knell of the Tea Party. While the political director of NPR, Ron Elving, called the conservative movement “impotent,” NBC’s Chuck Todd described how Democrats were “watching this Tea Party fade with disappointment.” (vid at top link)

Speaking of Todd, apparently he’s going for the record on how many times a person can be wrong while still getting paid to babble his inanity.

No, Chucky, it won’t.  Here’s why.  Most establishment Repubs are there because they’d like to stay in power.  Tea Party people vote their convictions.  Other’s, not so much.  Now, it is my impression Cantor fully believed in his immigration stance.  It just so happens, the people in his district disagreed with his position.  But, for the most part, Repubs who advocate amnesty are doing it for the campaign contributions of the businesses who are demanding cheap labor.  Once they realize they’ll go down in flames if they continue their advocacy, they’ll stop.

I’ve written several times about our illegal immigration problem.  All Repubs will be on the right side of the Tea Party if any mention of immigration reform (which we all agree is badly needed) begins with securing the border.  It’s that simple.  Secure the border first.  Institute sane immigration policies, and then we’ll figure out what to do with the millions of illegals already here.  It makes absolutely no sense to address the later without first addressing the former.

The message is simple, constitutionally sound, adheres to the widely held view our laws should be enforced, and allows for legal immigration.

20 Responses to Saaayyy ….. Was That Just Wishful Thinking? Leftards Wondering If The Demise Of The TEA Party Was Overstated