So, there’s yet another climate catastrophic article at the Huffington post.

I like how HuffPo does that.  You see, that wasn’t the tease to make you click on the story.  This was…

‘HEAT AND DROUGHT ARE A VICIOUS CYCLE’

The Southwest warming, especially in the summer, seems to be driven by dryness, because when there is little water the air and ground warm up faster, said Katharine Hayhoe, a climate scientist at Texas Tech University in Lubbock.

“Heat and drought are a vicious cycle that has been hitting the Southwest hard in recent years,” Hayhoe said.

Because I’m lazy, I’ll just show you what NOAA has to say about this.  Here are our supposed temperatures in the US.

Sure enough, with the imaginary temperature stations, we’re getting hotter, according to the lunatics.

Oddly, our hydrological droughts are not increasing. 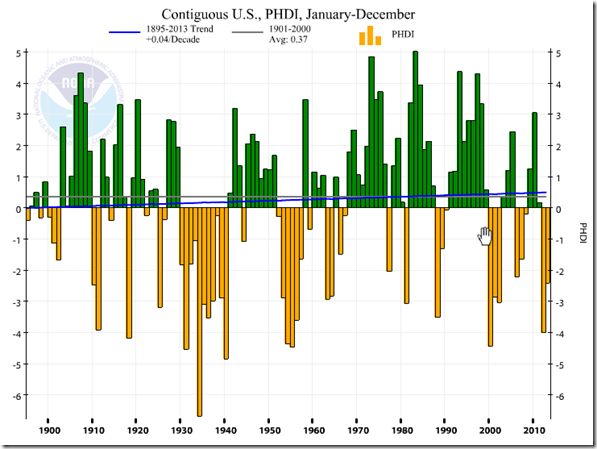 source for both graphs.