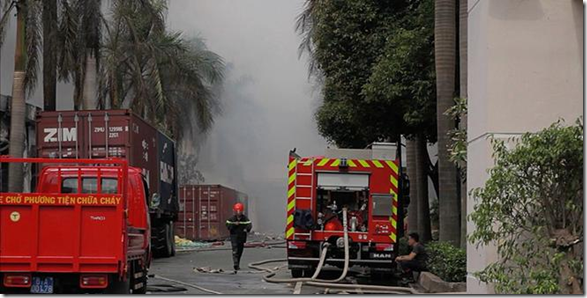 For me, anyway, this is very interesting, and something I think people should watch.  I didn’t know this was occurring.

HANOI, Vietnam (AP) — A 1,000-strong mob stormed a Taiwanese steel mill in Vietnam and hunted down Chinese workers, killing one, attacking scores more and then setting the complex alight, Taiwanese and Vietnamese authorities said Thursday, further inflaming tensions between Hanoi and Beijing as they square off against each other in the disputed South China Sea.

It was the first deadly incident in a wave of anti-China protests triggered by Beijing’s deployment of an oil rig in the long-disputed seas on May 1. Vietnam is angrily demanding that China remove the rig and has sent ships to confront it and a flotilla of Chinese escort ships, triggering fears of possible conflict.

Taiwanese companies, many of which employ Chinese nationals, have borne the brunt of the protests and violence, which is posing a challenge to the authoritarian government, which prides itself on maintaining peace and security. Prime Minister Nguyen Tan Dung said peaceful protests over the last few days were “legitimate,” but that anyone involved in violence should be punished severely.

So …. Taiwanese are creating businesses in Vietnam, staffed by China proper people, and the Vietnamese, being pissed at China proper, are attacking the Taiwanese owned businesses.  …. Does someone have more insight on this??