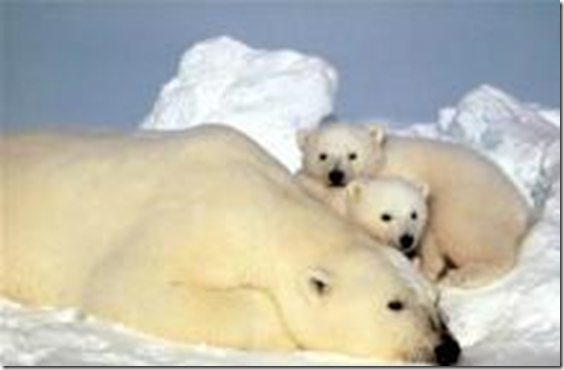 (CNSNews.com) – Five meters of ice– about 16 feet thick – is threatening the survival of polar bears in the Southern Beaufort Sea region along Alaska’s Arctic coast, according to Dr. Susan J. Crockford, an evolutionary biologist in British Columbia who has studied polar bears for most of her 35-year career.

That’s because the thick ice ridges could prevent ringed seals, the bears’ major prey, from creating breathing holes they need to survive in the frigid waters, Crockford told CNSNews.com.

“Prompted by reports of the heaviest sea ice conditions on the East Coast ‘in decades’ and news that ice on the Great Lakes is, for mid-April, the worst it’s been since records began, I took a close look at the ice thickness charts for the Arctic,” Crockford noted in her Polar Bear Science blog on April 18th.

There’s a bit more good information at the link, such as the most recent poley bear estimate is a crock, but, Suyts readers already knew that.  Also, there’s a revelation that the poley bears simply move to where the food is.  Bears are weird like that.

But, the most important thing to note about this is that the pretenders and usurpers of the mantle of science are being exposed for the idiotic loser lunatics that they are.  I think, soon, we’ll be able to put this jackassery lunacy called “global warming” behind us and relegate it to being a footnote in history, noting there was a quasi-religious movement which pretended to be concerned about our environment.  But, it turned out to be a bunch of Malthusian Marxist misanthropists.

35 Responses to LOLOLOLOLOL!!!!! Too Much Ice Threatening Polar Bears!!!!