Well, you don’t expect honest and informed reporting, do you?

CHARLIE ROSE: The Sochi Olympics suffered some of the most extreme weather of any winter games. Athletes faced fog, rain and temperatures in the 60s. Research predicts that could become the new reality at ski resorts around the world. As Don Dahler reports, the author of a controversial book believes winter sports could be doomed.

DON DAHLER: Porter Fox loves to ski. He’s been shushing down slopes since he was two. The features editor of Powder magazine has skied on five continents and says everywhere he’s traveled there has been less and less snow.

PORTER FOX (Powder magazine writer and editor): We’ve lost a million square miles of snow cover in the spring in the last 47 years.

DAHLER: Fox’s book about skiing and the future of snow includes studies on how it’s vanishing throughout North America, Europe and Asia. He cites climatologists who say that will decimate the ski industry.

FOX: Half of the 103 resorts in the north east likely will not be able to stay open and that’s in the next 30 years, which is pretty shocking. That’s where I grew up skiing.

And, of course, later we see this, some realist was allowed on, but, only to be shot down by a false meme…..

FAIRBANK: We’re in a constant state of climate change. I don’t know if we’re seeing – I know we’re certainly not seeing the kinds of patterns and data that suggest the sky is falling.

FOX: I wish he was right, I really do. I would tend to believe the thousands of scientists disagree with that opinion.

Yeh, well, I’m not that trusting of our satellites back in 1967 to have accurately accounted for our snow cover back then.  In fact, that’s not the way they measured it back then.  So, it’s a bit misleading to make the comparison to today, but, then, I wouldn’t typically expect a ski writer (that’s a job?) to know that, unless he’s shilling a book about it.  Then, you’d expect him to do his homework.  Unfortunately, he either didn’t do his homework, or his simply misleading people.

Now, it is true our spring snow cover has lost some ground.  Here it is over the last 30 years. 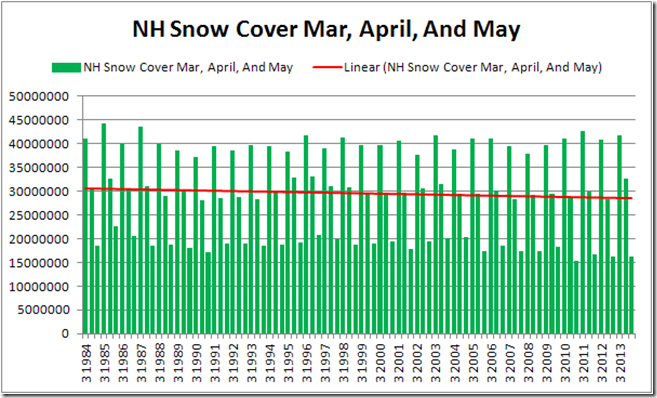 It looks to me like we’ve lost about maybe … well, we’ve lost a little more than 2.1 million km.  Or, using a very sciency term for the lunatics, we haven’t lost very much over the last 30 years.  Still if this continues, could it be the end of Winter sports in the Spring!?!?!?!?  Heaven forbid!!!!  But, maybe.  Maybe they’ll just have to move up their skiing schedule.

Yeh, thousands of scientists who disagree.  A complete and utter falsehood.

The end of snow ….. clearly signaled by increasing Fall snow cover, more so than the Spring is diminishing by.