Have You Seen This?? US Propane Prices Through The Roof!!!

Now, I feel bad, and silly.  About a week or so ago, a cousin dropped by and mentioned that I should write about this, and I thought I should, and told him I would.  But, I never got around to it.  Mostly because I figured it was an aberration and would quickly correct itself.  It didn’t.

Now, I’m scooped by Senators……. how embarrassing.  Worse, I can’t see why this is happening.  And, mostly because of my ignorance.  That said, the EIA isn’t much help in bringing clarity to this.

‘Something is not right’: Lawmakers press for probe of soaring propane prices

They’re right, something isn’t right.  Now, mostly this is because of the regional nature of propane and it’s price jump in the heartland ……

Now, on the surface, none of this makes sense.  Yes, in the heartland we’re used to price jumps in the winter, it’s what we use for heating and cooking in the country.  In the towns, we use natural gas, in the country, we use propane because we don’t run NG lines to every home out in the sticks.  It doesn’t pay for itself.

Now, propane is a derivative product.  You can get it from processing and refining bother natural gas and oil.  Given the US’ recent massive increase of drilling both, you’d think we’d have a glut of propane.  And, if we are, then our propane prices should be lower than usual, not going through the roof!!!  It’s interesting in the story what they list as one of the possible causes for this …..

The national average price for propane climbed this week to more than $4 a gallon, up $1 since last week. Industry and state officials say the price jumps are because supplies were stripped after last year’s harvest when farmers needed to dry an unusually large amount of grain.

Propane is used in operations from drying grain to heating poultry and livestock housing. The hikes hit farmers and agriculture operations the hardest.

That would be when the lunatics declared permanent drought in much of the heartland.  But, did that drying effect supplies?

I don’t see a huge drop in the stock during harvest season.  Certainly not in the Midwest.

Now, mind you, I can’t readily find all the regional data I need, but, I can find national data.  Look at this!!!!  The chart doesn’t show it but the data goes to Jan 24 …

Our production has finally out stripped demand!!!!!!  Propane prices should be lower than it has been in the last 10 years!!!

Now, I don’t have demand numbers for the Midwest, but, I do have production numbers ….. 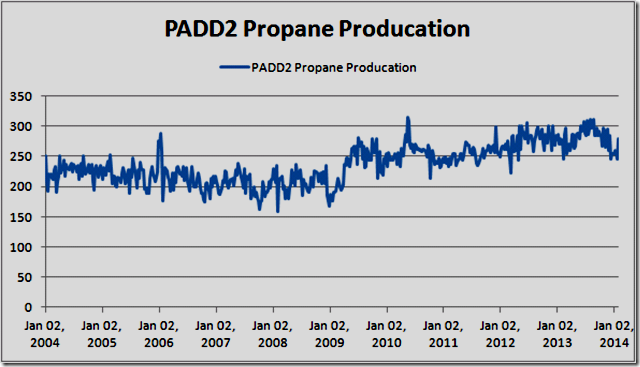 Yes, there’s a little drop off in production recently, for the region, but that’s still more than what we were seeing in 2009 and before!!

Yes, it’s been a cold winter, but, it hasn’t been the worst in recent years.  In fact, I was living in the country when I experienced the worst winter in recent memory, and propane never got close to $4.00/gallon.

Usually, I can find an pretty easy explanation when people see a rise in fuel costs.  The senators are right.  Someone needs to be looking into this and providing us with an explanation.

To get an idea of scale and reference, in years past, during a nice winter, I could fill a 500 gallon tank and it would just barely get me through the winter.  During a cold winter …. no way.

Source for data and other’s wishing to play with numbers can start here at the EIA.

This entry was posted in Energy. Bookmark the permalink.

19 Responses to Have You Seen This?? US Propane Prices Through The Roof!!!