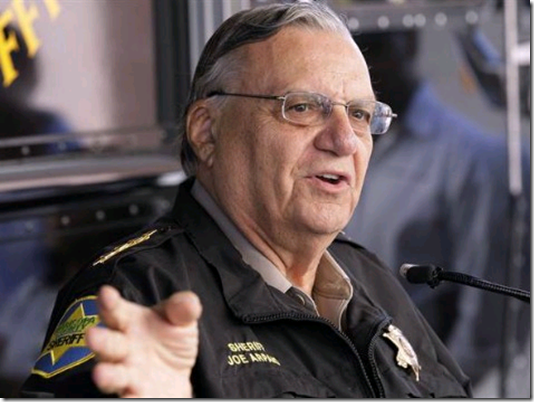 So, HuffPo wrote a story about Sheriff Joe Arpaio.  Pretty much they’re calling him a meany pants.

Maricopa County, Arizona, Sheriff Joe Arpaio has planned a particularly economical meal for the roughly 7,500 to 10,000 inmates in his jail system this Thanksgiving.

The meal comes in at a cost of just 56 cents per inmate, and its main entrée will be 24-cent vegetarian turkey soy casserole. Arpaio tweeted the Thanksgiving menu Wednesday morning. ….

Arpaio has “even stopped serving them salt and pepper” to save taxpayer money, according to the bio.

In September, Arpaio implemented a vegetarian diet for inmates in an effort to save $100,000 on food costs for prisoners. He also announced in March a plan to charge inmates $1 for their meals, according to ABC15.

And, I thought the nutters declared salt bad for you.  In a unrelated, but, added part of the article …..

“Any defacement or vandalism of the flags by inmates comes with the penalty of bread and water. Ten inmates are currently on bread and water for this infraction,” Arpaio said in the press release.

Check out the sheriff’s tweet and the full menu for Thursday’s meal below:

It’s really not hard to not deface things.

Which, is how you’re suppose to react to lunatics.  There’s an interesting part of the response. …..

Another effort Sheriff Joe has in mind will likely upset his detractors even more; namely, Arpaio intends to begin separating U.S. military veterans from other inmates. “These guys served our country,” he explained. “I want them to have special training, job programs, I want to have a program that helps them get jobs after they serve their time,” he said.

Sheriff Joe added: “I’m sure any effort to house veterans separately from the others will get the ACLU [American Civil Liberties Union] after me again, but these guys fought for our country and I want to do something for them.”