How Bad Is It For Leftards? This Is The Daily Beast’s Lead 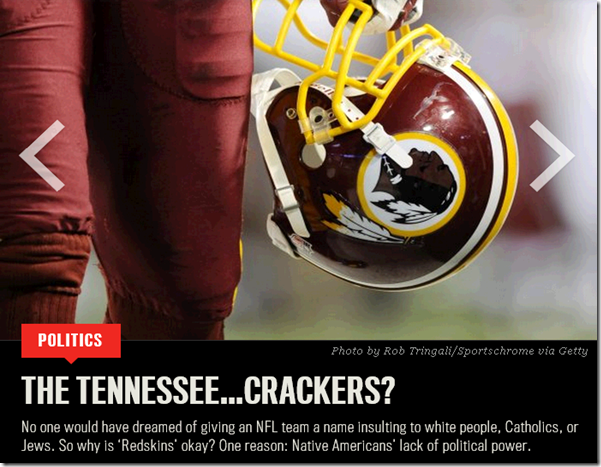 Well, that’s just sad, they don’t have anything else to write about?

And how illogical is this?  And, besides, thanks to the leftards and their fascination with one shooting death in America, we already know “crackers” is a compliment.  So, it’s probably white people’s lack of political clout that prevents the Tennessee team from being able to be called the “Crackers”.  And, yes, that would be a ferocious sounding name for a football team.

For the leftards, I have a question.  What does it mean, if one was a native American, to be called an “apple” by another native American?  Let me help.  It’s much akin to a term once used to deride black Americans, an “Oreo”.  It’s stating that the person is red on the outside, but, white on the inside.  For some reason, that’s derogatory.  Not, the outside part, mind you, but, rather the inside part.  ……. the outside part.

You see, right there we see native Americans identifying their skin color as “red”.  And, that skin color isn’t what they object to.  Redskins can hardly be insulting to American Indians if they themselves, with pride, describe themselves as being red skinned.  It’s an idiotic conversation to have.  Now, if one was to have a team name like “blanket ass” or something of that nature, then that would be derogatory, but, also a stupid sounding name for a football team.

One of the things which pisses me off them most about this is that we have people like Michael Tomasky telling us what is and isn’t, or what should and shouldn’t be offensive to other people.  Shut up, Tomasky, you idiot.  WTF do you know about it?  Serbian and Italian descent?  Find some team named the “whops” and then cry.

I’ve a bit of native American in me.  No, not like Elizabeth “Spreading Bull” Warren, but, real blood of Osage lineage.  I don’t identify as a native American because I wasn’t brought up that way.  I have, however, met many who were, and are native American.  Like all people, some were thoughtful and bright, others, not so much.  Still, I’ve come to know many.  From all the conversations with people who are and identify as native Americans, I’ve never once had one tell me they were offended by the football team, the Washington Redskins.  Many actually have real things to worry about.  Come to think of it, Tomasky, don’t you imagine there’s something more pressing in our society today, other than worrying about a moniker of a football team?  Oh, that’s right, you leftards don’t want to talk about those things because the left is failing miserably on all fronts.  So, we distract and deflect.

I suppose this from the Beast isn’t any worse than HuffPo’s lead …….

LOL, are they letting Biden out of exile?  They’re going to tell us about a man with absolutely no power and authority in this administration and keep us up to date about his focus?  Really, HuffPo?  That’s what you got today?

11 Responses to How Bad Is It For Leftards? This Is The Daily Beast’s Lead