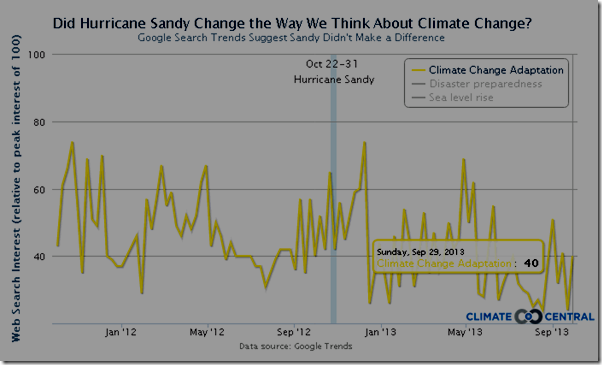 Anyone notice a trend here?

n the year since Hurricane Sandy struck the Mid-Atlantic, news articles have widely declared that the storm has “changed the public’s view of weather threats” and that “resilience” would be the environmental buzzword of 2013. That sounds all well and good, but are headlines enough to move public opinion and spark new discussions?

Signs seem to point to “no.” Policy has moved forward in a number of the states most affected by Sandy. But the broader U.S. public has shown little interest in carrying that conversation to the national level, and despite proclamations otherwise, the media has been equally disengaged.

I could go on and on about how our hurricanes are on the decrease, globally, and about the length of time it has been between hurricane landfalls, and ACE values and whatnot, but, that’s not the point of this short post.

What we’re seeing here is disappointment by the lunatics that they can’t advantage human suffering anymore.

People are gullible, and, for the most part, people wish to believe in the good intentions of their fellow humans.  It’s just the way most of us are wired.  But, even that has its limitations.  It has become so predictable, that each time human tragedy strikes, the public is keenly aware that there will be lunatics out there screaming that this is a secular “sign of the times”, the end is nigh!

People are getting tired of these ghouls.  They’re worse than ambulance chasing lawyers, because there is at least some times, and some opportunity for the ambulance chasers to do good for victims.  Not true, with the climate lunatics.  The only thing they offer the victims of human tragedy is more suffering.

They are the religious equivalent to the Westboro lunatics.  Well, they have the same religious fervor.

If a member of the military gets killed abroad, the Westboro lunatics show up saying this is a consequence of one sin or the other.

If a hurricane or tornado befalls a population center in the US or other places full of climate lunatics, they come out of the woodwork, as well.  Not to actually help or ease human suffering, mind you.  No, they’re there to condemn people for driving their SUV, or wanting cheaper electricity.  They’re condemning the victims of natural tragedy for sins against their god, mother earth, Gaia, or some other such Druid notion.  Oddly, the Westboro lunatics actually offer a vision of less suffering.  The climate lunatics offer you hair-shirts, mud-huts and some strange Malthusian/Luddite vision of a totalitarian utopia.

Odd that people aren’t becoming more receptive to such a message.  Not only are the climate lunatics misanthropists, they’re stupid, as well.  Sure, I’d trust the faux science of an imbecile.  Even if I hadn’t taken the time to look at the actual empirical evidence which adequately counters all of the lunacy of the alarmists, I’d still not respond to their stupidity.  And, now, finally, neither are the rest of the people.

Just look at the response the lunatics had with the fires in Australia.  Their national leader actually went out and fought the fires.  The lunatics derided the effort and cynically demanded more taxes on CO2 emissions.  Maybe if they made another 10/10 video.