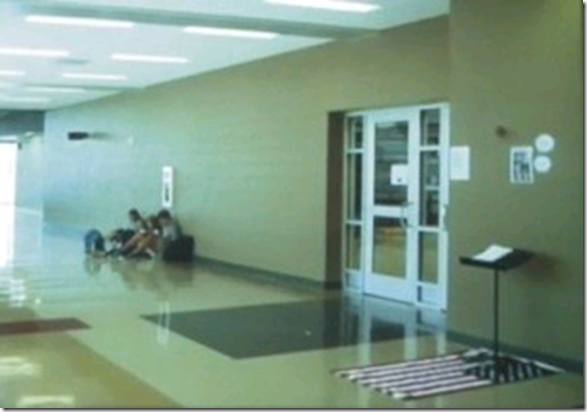 As part of the art exhibit, students were encouraged to stand on the flag and write their reflections on how they felt standing on the flag.

Local residents filled social networking sites with their outrage over the flag desecration with many calling for the art teacher to be fired.

“The teacher should be fired and run out of town,” wrote one outraged Paducah resident. “I have a son serving to protect this flag at this very moment.” …..

Art teacher Shand Stamper has since apologized for the controversial art display – telling The Paducah Sun that it was not a specifically assigned project. The newspaper reported she sent a written letter of apology to school administrators.

“I love our flag and the nation it stands for. I love the freedom I enjoy because of our brave veterans. I feel sick and deeply sad that through my actions I have dishonored these men and women and also poorly represented you all,” she wrote in a letter obtained by the newspaper. “(To say) I am devastated by my actions bringing outrage and negativity on you is a gross understatement.”

Michael Ceglinski, the principal of McCracken County High School, said the teacher made an error in judgement. He said the project was not sanctioned by the school nor approved by administrators.

Well, at least her words are contrite.  However, she has forfeited her ability to educate American children.  If her judgment is so poor that she doesn’t understand that her outrageous actions would have such a reaction then she can’t possibly properly educate our children.

This entry was posted in Education. Bookmark the permalink.

11 Responses to I Cry ….. Flag Desecration By Entirely Clueless Teacher?