You know, assumptions are the road to hell.  But, this is beyond absurdity.  It’s abject stupidity.

By now most readers interested in the climate would have seen this at Anthony’s.

Much of the work in dendrochronology, and dendroclimatology in particular, relies on accurate, unbiased reconstructions of tree growth long into the past. As a result, a great deal of eﬀort has been put into trying to isolate important trends and identify potential 5 biases. However, one major bias called “modern sample bias”, ﬁrst identiﬁed by Melvin (2004), is still largely neglected in applied studies, despite its potential impact on all regional curve standardization chronologies (Brienen et al., 2012a).

Dendrochronologists observed that the older a tree was, the slower it tended to grow, even after controlling for age- and time-driven eﬀects. The result is an artiﬁcial downward signal in the regional curve (as the older ages are only represented by the slower growing trees) and a similar artiﬁcial positive signal in the ﬁnal chronology (as earlier years are only represented by the slow growing trees), an eﬀect termed modern sample bias.

I’m speechless.  Dumbstruck.  Oh, fer fricks sake!!!!  You mean to tell me there are limits to organic growth?  Really?  And that our super sciency folk didn’t properly take this into account when they pretended trees could be thermometers?

Are you kidding me?  All of these chronologies from tree rings and they didn’t account for something so basic that a junior high school student would know better?  Are these people serious?  And, that there was a paper out in 2004 which demonstrated their abject stupidity and it is still being ignored?

Analyzing 1200 randomly selected published chronologies, we find that regional curve standardization is improved by adding an effect for individual tree productivity in 99% of cases, reflecting widespread differing-contemporaneous-growth rate bias. Furthermore, modern sample bias produced a significant negative bias in estimated tree growth by time in 70.5% of chronologies and a significant positive bias in 29.5% of chronologies. This effect is largely concentrated in the last 300 yr of growth data, posing serious questions about the homogeneity of modern and ancient chronologies using traditional standardization techniques. 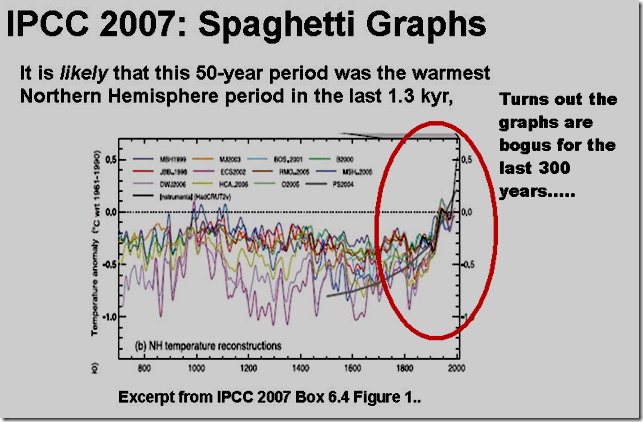 First of all, I have already shown information which adequately debunks the premise of the possibility of treeometers.  In fact, it’s been known for 40 years.  So, it isn’t worth dwelling on about the validity of these idiotic graphs.  They weren’t valid then, they won’t be valid even if the properly account for growth limits.

So, what’s the point?

This goes directly to their knowledge and abilities.  And their stubborn refusal to acknowledge basic science!  Consider, also another old post I wrote……

Yes. Yes, They Really Are That Dumb!

The scientists are careful to point out that lower-altitude glaciers in the Asian mountain ranges – sometimes dubbed the “third pole” – are definitely melting. Satellite images and reports confirm this. But over the study period from 2003-10 enough ice was added to the peaks to compensate.

…. Until now, estimates of meltwater loss for all the world’s 200,000 glaciers were based on extrapolations of data from a few hundred monitored on the ground. Those glaciers at lower altitudes are much easier for scientists to get to and so were more frequently included, but they were also more prone to melting.

The bias was particularly strong in Asia, said Wahr: “There extrapolation is really tough as only a handful of lower-altitude glaciers are monitored and there are thousands there very high up.”

When we see these stupid proclamations about.  You see, our super sciency people didn’t understand that melt rates are different at different altitudes.  And, that’s why all of their doom saying proclamations were wrong about various mountain ranges and melting ice.  They were are that stupid.

Now today, we see that they didn’t properly understand tree growth rates.  That the older a tree is, the slower it grows.  Yes, they are that stupid.

You see, I assume that when we see these studies about tree rings and melting Himalayas that they at the very least include basic physical science such as “it’s colder at higher altitudes”, and basic biology like “older trees grow slower”, and “there are limits to biological growth”.

But, they’ve demonstrated that my assumptions about their basic science knowledge were entirely incorrect!   It is guaranteed that more than half of these idiots couldn’t pass a basic high school science class of the 1970s or 1980s.  They simply don’t possess the basic knowledge necessary to conduct science of any sort.  What these people are doing is called numerology.

For those not familiar ……  Numerology is any study of the purported divine, mystical or other special relationship between a number and some coinciding observed (or perceived) events.

It’s just that simple.  They’ve collected an infinite amount of numbers and have made conclusion with these numbers, but, none of it is based in solid basic science.

It is sophisticated, it is elegant, and it is numerology.

Thousands upon thousands of papers written devoid of basic science.

Now, consider that these thousands of papers are being taught as science fact.  That age of stupid continues.

This entry was posted in Climate, Education. Bookmark the permalink.