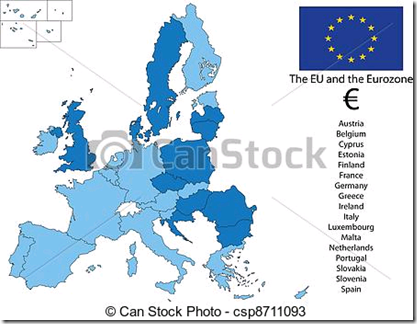 Well, Spain wins the worst news of the quarter race.  They contracted for the 7th straight quarter.  They’ve got an unemployment rate of 27.2%  or 26.7% depending upon which report you want to believe.  If it is 27.2%, then they’ve tied with Greece in the race to the bottom.  The entire Euro zone has a 12.1% unemployment rate, you can see a national breakdown here.

For some reason, the Zone’s inflation rate of 1.2% is worrying people.  Not because it’s in the midst of a continental contraction but, because it’s too low….. or something.

Inflation tumbled to 1.2 percent in April, the lowest level since February 2010 and the biggest monthly drop in more than four years, the EU’s statistics office Eurostat said on Tuesday, reflecting an economy mired in recession.

That put the annual rate of increase in the cost of living well below the ECB’s target of close to, but below 2 percent, and raises pressure on the central bank to act.

I think it’s more of the desire for the tail to wag the dog.  But, this will get the super-heroes in the ECB to spring into action!!!

“With inflation weaker than expected, unemployment rising yet again and signs of a longer recession, it would be a confidence boost,” she said. ….

According to a Reuters poll last week, a narrow majority of economists expect a 25 basis point cut on Thursday at the ECB’s meeting in Bratislava, taking the bank’s main refinancing rate to a record low of 0.5 percent.

And then here we see Reuters beating the anti-austerity drum….

Europe’s leaders are now rethinking austerity that some economists and politicians say creates a damaging cycle where governments cut back, companies lay off staff, Europeans buy less and young people have little hope of finding a job.

Amazingly, some reality was interjected……

The 17-nation euro zone has little free cash to invest in the economy after a decade of borrowing swelled public accounts to unsustainable levels, but budget cuts are increasingly blamed for holding back a recovery.

In the world of unicorns and rainbows the Euro zone would just create more debt to spur their economies in fine Keynesian fashion.  But, sadly, in reality world it seems they’ve already spent all of their money and credit.