More On The "Temps Don’t Cause Ice Loss"

It’s a pretty simple thing to see.  But, for some reason, the nutters keep calling it melt.

We’ve probably reached our maximum for the year……

Which, as you can see is entirely consistent with the last several years, right on line with the last decade’s average.  One can also see that we’ve lost a bit in the last few days. 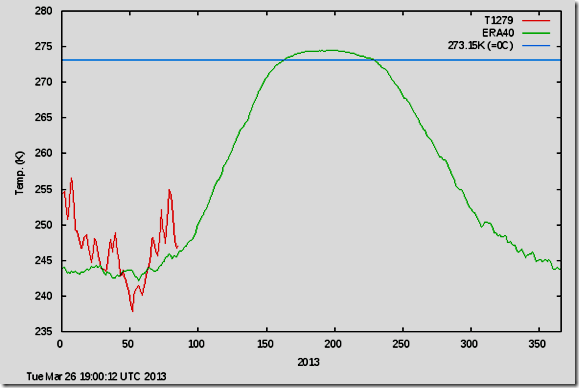 Of course, that’s just 80deg north and above, but for a significant amount of area south of there, it is still plenty cold.  Indeed, Anchorage, AK, which is at 60 deg north is at -1ºF today.   Here are the current temps in the arctic…..

You can see there’s no melt going on any where.  Except maybe for that place in Greenland, where the H2O has different melting properties.

If temps dictated ice extent in the Arctic, then we should be increasing, not decreasing, as we’ve seen lately.

What’s going on is currents and ice drift…….