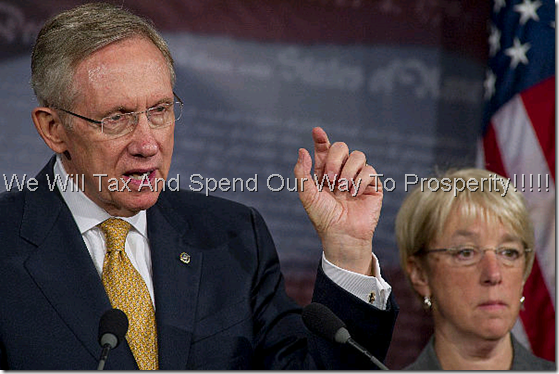 Currently, I’m screwing with the Marcott data.  I’m rewriting what I thought was a clever post, but, upon reflection, it isn’t right to haphazardly show things, so I’m off to make sure I’m not being deceptive.  @^@#^@$!@$@  I hate it when I have a conscience.  In the meantime I thought I’d give readers something to talk about or laugh at……

Well the Senate finally got around to writing a budget.  Such as it is.

There’s really very few details in their budget, but, with a Reid/Murray plan, one can already know what’s in it.  They didn’t disappoint.

It includes $1.5 trillion dollars in new taxes, even though they lied and said $1 trillion.  Did they think that would make a difference?  These are over a 10 year period.

According to the document’s own tables, the Reid/Murray plan calls for a $162 billion spending jump from this year to the next, and spending continues to rise every year.  That second clause also applies to the Ryan budget, incidentally, which increases spending by an average of 3.4 percent per year — significantly less than the 4.9 percent average hike under the current path.  Democrats’ plans will exceed even that rate of increase.  They propose to spend at least $46.4 trillion in the next decade (compared to $41.5 trillion in the Ryan budget), roughly $645 billion higher than the already-elevated current path.  As expected, Democrats try to hide this reality by leaning on accounting tricks, such as “savings” conjured from a fraudulent Afghanistan war baseline.

Even with all the (real) tax hikes and (fake) “cuts,” the Democrat budget never even approaches balance.  Based on their own numbers, the closest Democrats say they’ll come to balancing the budget over the next ten years is in 2016, when they project an annual deficit of $407 billion.  By contrast, Ryan’s budget crosses into surplus in 2023, and pushes annual deficits below the $100 billion threshold seven times in ten years.  Another point of reference: President Bush’s average annual deficit was $250 billion (although it can be fairly argued that he deserves a share of 2009’s monster shortfall), so Senate Democrats’ best expected deficit is still more than $150 billion higher than Bush’s average. Also, for the record, the last time a Republican Congress and a Republican president passed a budget (FY 2007), the deficit was $161 billion, even with two active wars at their peak.

All that stated, even Ryan’s budget will never balance at an increase spending of 3.4% annually.  But, 5%, is certain doom.  The 2016 projected budget deficit by the senate plan is pure fantasy.  It is contingent upon a growing healthy economy by then.  That’s not going to happen if their budget passes.

The more I look at it, the more I’m convinced that these approaches are entirely wrong anyway.

Here’s the blueprint for the proper approach.  Tie the budget to the economic performance of the nation.  In order to achieve a balanced budget, simply let the budget expand 1% less than the economy.  Done.  In the mean time, but out the insipidly stupid spending like the idiot study of homosexuals and their weight differential between lesbians and gay guys.  In this manner there is no pain to scream about.  At some point, because of the US demographics, we’ll have to address Social Security and Medicare.  Eventually, we’ll have to quit pretending they are separate from other govt expenditures.  We’re going to have to become more efficient at both.

As long as Dems are in charge of either house or the oval office, we’ll never get there.  They’ll ride the economy right over the abyss.  And, I don’t hold much more hope that the Repubs would make the necessary changes if they had control of both houses and oval office, either.  They had a chance, but, failed.

I’m thinking the new Suyts party needs a shot at this.