Volcanoes With ENSO This Time!

Last year, I wrote a post about volcanoes and the temps HadCrut had recorded in the direct aftermath.  Given the recent proclamations about volcanoes and their impact by a couple of pinheads posing as scientists, (Rahmy, Foster, Muller….. ) I thought we could revisit this for a bit while giving some ENSO information for some of the time periods.

We looked at every VEI 5 or 6 volcanic eruption in the 20th century.

Here is the listing of 5-6 volcanic eruptions last century.

We’ve a couple of fair sources for what ENSO was doing during these years, though, I’m less sure about them the further we go back in time.  Latitude brings us this…. 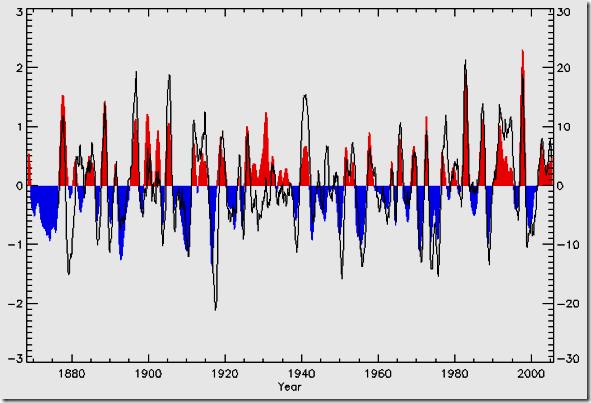 found here.  This coincides pretty well with Hank’s offering found here.  This gives the year by year positive, negative, or neutral status of ENSO.  For more precise details, Robin directed us here.  Note this statement from the link Hank offered.

Table 1: The years in each category correspond to the first three months of the ENSO year namely October, November, and December. For example, the ENSO year 1970 starts October 1970 and ends September 1971.

Okay, so Santa Maria is the first major eruption of the 20th century.  It occurred in 1902. 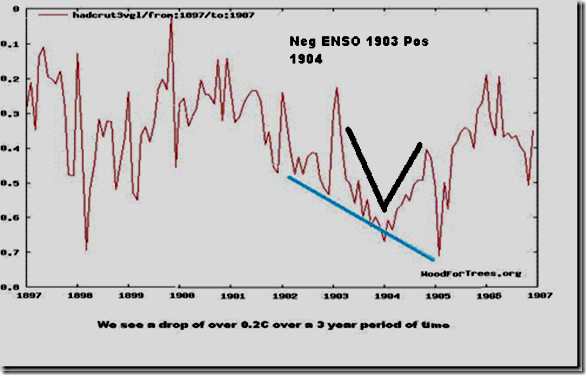 Here we see nothing unusual in the temp variations, and ENSO can easily explain the observed variations.

The next volcano eruption was Ksudach in 1907.

As we can see, the ENSO values can easily account for the small drop indicated during the immediate aftermath of Ksudach.

1912 and 1913 each saw a major eruption.  Novarupta and Colima, respectively.  Now, this is interesting, in that while 1912 was listed as neutral for ENSO, the values were positive early in the year, then went negative, then back to neutral.  1913 is listed as positive ENSO and 1914 as neutral.

While much of this can be easily explained by ENSO, these volcanoes, if they did anything, warmed the temps.

In 1955-1956 Bezymianny erupted.  1955 and 1956 were negative ENSOs, and 1957 saw positive values continuing to the end of 1959.  Again, attribution, especially with crap concepts like a global temp average is probably impossible to attain, but we can rule things out.  Did Bezymianny cause any cooling?  Absolutely not.  Did it cause the increase in average temps?  Maybe.

Volcanoes cause cooling….. keep repeating until the world believes it!

1963 saw the eruption of Mount Agung.  Here we see a strong cooling signal, but, guess what?  Yep, 1964 was marked with strong negative ENSO values.  Not quite strong enough to call it La Nina, but persistent -1 and less from May through November.  So, while one can say things cooled after Agung, again, attribution seems a bit of a stretch.

The next two volcanoes are interesting.  They don’t occur one year apart, but two.  Those old enough to remember, have no problem recalling the eruptions.  Mount St. Helens in 1980 and El Chichon in 1982.  COAPS lists ENSO as neutral, but I don’t see how with the NOAA numbers.  They are strongly positive and explains the spike in 1983.  1984 and 1985 had all negative numbers save for two months. 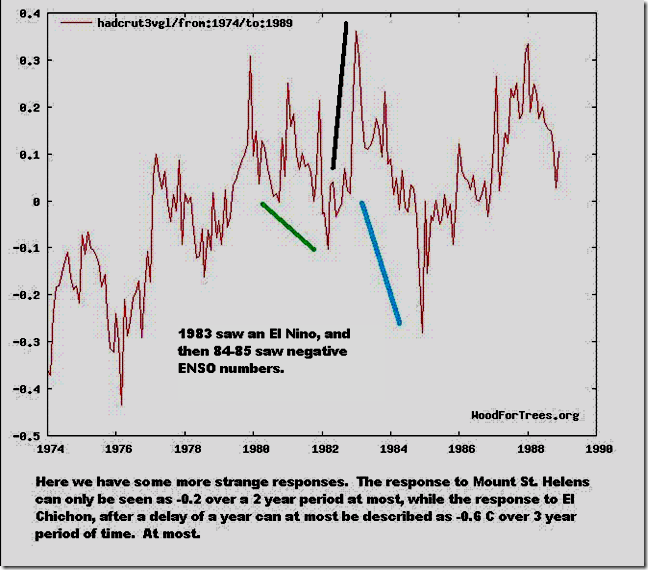 Recall the drops in temps we see are relative and shows a very limited time frame.  Again, ENSO can explain the variations.

The last two eruptions are the only two which happen in the same year.  A VEI 6 and what is called a 5+.  Mount Pinatubo and Mount Hudson, both occurring in 1991.  If volcanoes cause cooling, surely we would see significant cooling in the subsequent year, 1992 and beyond.  Pinatubo was the largest eruption we’ve seen in our lifetime and Hudson was the next.

This case, is the only case I can find where the temps responded against the ENSO values ….. sort of.  As we can see, the temps only dropped about 0.2 C.  But, it certainly wasn’t linear as one would expect.  From 1991-1994 the ENSO values were positive.  Pinatubo is described as the “largest stratospheric disturbance since Krakatoa eruption in 1883

Hudson as….in addition to the ash, a large amount of sulfur dioxide gas and aerosols were ejected in the eruption. These contributed to those already in the atmosphere from the even larger Mount Pinatubo eruption earlier in the year and helped cause a worldwide cooling effect over the following years.

Yeh, a whopping -0.2C ending 2 years later.  That’s it?  The biggest eruptions of our life time, both in the same year, and it caused cooling well within the normal year-to-year variations?  While it is probably true ENSO can’t by tied to the temp recordings, simply assuming the eruptions caused the decrease in temp recordings is complete sophistry.  Turns out, volcanoes and ENSO aren’t the only natural variants occurring in the chaotic system we call our climate.  The attribute the decrease in temps to eruptions when out of 12 eruptions last century, an unexplained decrease occurred only once.  Moisture content of the air?  Cloud cover not related to volcanism?  Solar variations?  Alterations or reversals of circulatory events?

There’s no reason to believe volcanoes cause much of anything other than a local phenomena.  There is no signal to state otherwise.  Anecdotal evidence of one event, against 10 other eruptions simply isn’t cause to make emphatic statements that volcanoes cause cooling.  I understand the theory and it’s a fine, very plausible theory.  It’s just that the facts (Note to Muller:  this is what we call an empirical approach.) don’t back up the theory.

Should the statement “volcanic eruptions cause global cooling” be accepted as fact?  I don’t see it.

My thanks to the Lat, Hank, and Robin!  All temp graphs were generated by the WFT site. (Which appears to be temporarily down.)

10 Responses to Volcanoes With ENSO This Time!