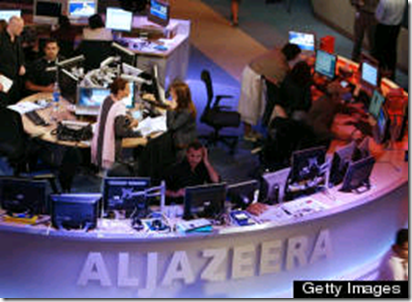 The good news is Al Gore’s Current TV is going away.  The bad news is Al Jazeera is buying it.

LOS ANGELES/NEW YORK (Reuters) – Al Jazeera said on Wednesday it will buy Current TV, the struggling cable channel founded by Al Gore and partners, in a move that will boost the Qatar-based broadcaster’s footprint in the United States.

Terms were undisclosed, but analysts estimated the deal could be worth as much as $500 million.

Al Jazeera said it would start a new U.S.-based news channel with the acquisition, which will make it available in more than 40 million U.S. households, up from 4.7 million prior to the deal.

The deal brings Al Jazeera, which operates under the patronage of the emir of Qatar and his family, into closer competition with American news channels like CNN, MSNBC and Fox.

The good news is Time Warner is refusing to carry it.

But while the new channel will soon be available in 40 million households, Al Jazeera faced a setback when Time Warner Cable — which reaches 12 million homes — announced it was dropping the low-rated Current, which occupied a spot that could have been switched to Al Jazeera America.