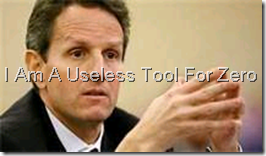 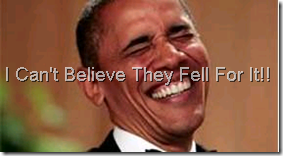 Barry Zero recently dispatched Timmy “we don’t have a plan” Geithner, to negotiate for Zero in an effort to avoid the fiscal cliff.

The rhetoric is well known by now.  Obama is pushing to raise the tax rates on couples earning more than $250,000 and individuals earning more than $200,000.  He wants to bring their rates back up to 39.5%.  The latest estimate is that would generate $82 billion per year.  Yours truly and a few others have been saying for a very long time that this doesn’t amount to anything realistic towards fixing our deficit spending.  Repubs have finally caught up and starting noting the same thing.  Barry Zero made this one of his central campaign talking points.  For reasons lost to posterity, no one of prominence made it a point to laugh at Barry Zero for making such a meaningless gesture a central theme and primary campaign issue …….. not the LSM, not Romney, not Fox, no one but, just a few voices in the wilderness.

It is so meaningless that now one of the more prominent advocates of the tax hike, Warren Buffett, says it’s nothing more than a morale booster for the middle class.  This is probably worthy of a post itself, I’ll just say, knowing that my potential employers will have less disposable income doesn’t really fire me up.  I’m not sure what increased middle-class morale is supposed to do, but this doesn’t really put an extra skip in my gait.

I think now is a good time to review what the “fiscal cliff” really is.  I’ll quote from wiki…… But, I’ll enlarge and embolden a few of them.

First of all, we need to end the 2% SS payroll cut anyway.  For those who don’t know, all this does is reduce the amount of Social Security you will be able to draw when you retire.  The government isn’t giving you a tax cut, you are contributing less to your retirement.  This speeds the impending insolvency of Social Security.  The 2% payroll tax cut is estimated to be about $120 billion/yr.

Secondly, I don’t know how other states are dealing with the unemployment extension, but in the state of Kansas, this is already expired and isn’t available.  Again, this is probably a bad idea, anyway.  It is estimated that this would cost $30 billion in additional federal spending, but it was $44 billion for 2012.

Thirdly, does anyone really believe the Obamacare taxes won’t be imposed?  We’re going to get them anyway.  To avoid the “fiscal cliff” this may delay their implementation, but it won’t avoid them.  The estimated tax costs to the HCER is $14 billion and the PPAC is $20 billion annually after being offset by Barry’s raping of Medicare.  This totals $34 billion annually.  (Note:  this isn’t the total cost of Obamacare, just some taxes delayed.)

Why did I include this lengthy morass of numbers?

Because of Timmy and Barry Zero.  Timmy showed up to “negotiate” with the Repubs.  Timmy’s efforts resulted in forcing Mitch McConnell to LOL.  Seriously!  Boehner reacted only slightly differently by telling Timmy “this is not a game!”

That’s where the Speaker is wrong.  Barry, Timmy, and the rest of the Marxist Dems are playing a game, and they’re going to win if the Repubs don’t recognize what’s happening.  The Repubs will lose, but most importantly, the American people will suffer severely for this political gambit.

Back to the charts.

Two days ago, I graphed Barry Zero’s plan to deal with the budget. 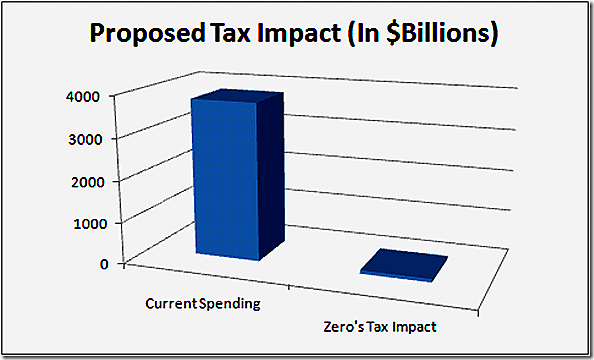 That was before we knew that Zero’s plan actually includes doubling the amount of tax increases he campaigned on.  I’ll graph his new plan. 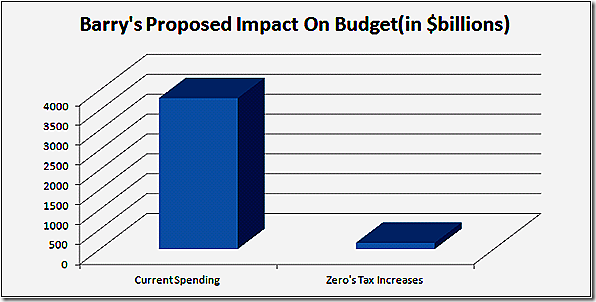 Now, some of you may state that this isn’t a fair comparison.  That I should be comparing it to our deficit.  Fair enough.  I’ll even make the assumption that removing $160 billion of disposable income from the free economy won’t have a negative impact on our revenues, which it will.  The $80 billion probably wouldn’t have had that much affect.  $160 billion most definitely will.  Our current debt is $16 trillion.  It is estimated that our deficit spending in 2012 was $1.1 trillion, but the final numbers will be more than that.  So, Zero plans to raise an additional $160 billion a year with no cuts to the budget.  Let’s see what happens assuming spending won’t go up.  (It most definitely will.) and that the tax increases won’t harm the economy, thus losing tax revenue.  (They most definitely will.) 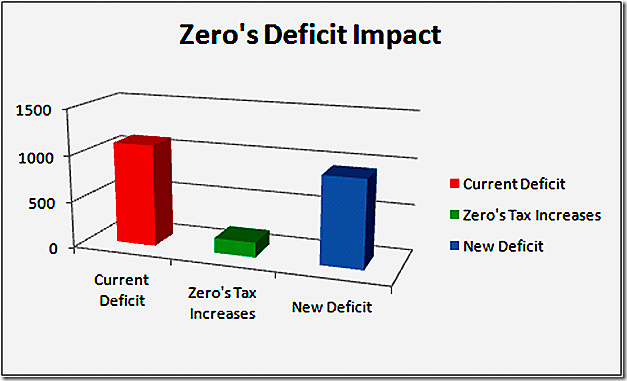 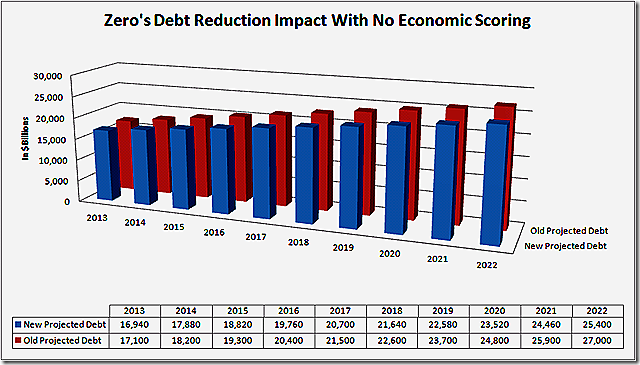 That’s his plan!  That’s it!  Zero and Treasury Tool Timmy proposes additional taxes of over 10% of our GDP.

This isn’t a choice.

My Advice To The Repubs.

Give it to them.  Break off negotiations right now and say you’re willing to go along with this madness.  Abstain in the voting or vote present.  Make it a point to say you’re against this idiocy, explain why, but underscore the administrations lack of a serious approach to our problems.  The longer these negotiations are drawn out the more tax proposals the administration will bring.  If we accept the tax proposals, we will be plunged into a further, deeper recession.  If we take the fiscal cliff, we will be plunged into a further, deeper recession.  Only, the Repubs will be blamed for it.  Call their bluff and let them own it.  We will get a double moral boost from these people who hate Americans.  Expose their hatred for Americans and let them have it.

My thanks to Dirk for pointing out my math errors.