The Treasury said on Tuesday the October deficit was $120 billion, larger than economist forecasts for a $114 billion gap and up from $98 billion in October of 2011.

That’s great, in an economy not even moving at a 2% increase, we increase our federal spending by over 18% over last year.  Brilliant!

Growth in expenditures outpaced rising receipts, deepening the deficit. Outlays grew to $304 billion from around $262 billion in the same month last year while receipts rose to $184 billion from $163 billion.

The little article finishes with something curious…….

The 2012 budget gap was $1.089 trillion, smaller than last year’s deficit of $1.297 trillion largely because of higher corporate income tax receipts and less spending.

Uhmm, no, that’s not correct.  We spent more last year, not less.  We didn’t spend a lot more, but more, we did.  I’d also direct your attention to the estimated decrease of the deficit.

I’m wondering, with an 18% increase in the first month of the fiscal year, and a doubling of our outlays to receipts, when are we going to decrease the deficit?  Prolly after Jan 1. 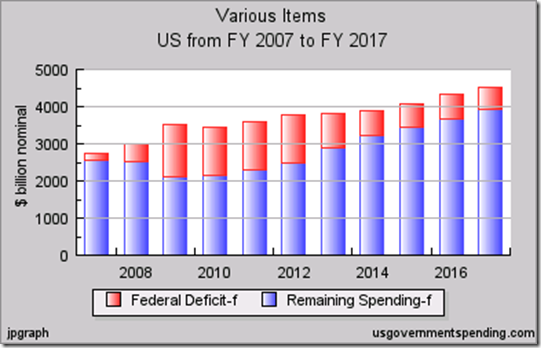