Obama Cancels Campaign Stops To Monitor Storm, But Not For Benghazi 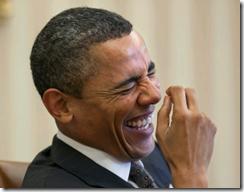 The president canceled appearances in Northern Virginia on Monday and in Colorado on Tuesday to monitor the massive storm, which, according to the most recent models, is expected to make landfall along the mid-Atlantic coast Monday evening.

Now, this is the correct response for the storm.  Of course, cancelling in Northern Virginia is more because people wouldn’t be able to get to him anyway, so it isn’t like he’s doing anything magnanimous.

And, as far as Colorado goes, we might not see him in the state again.  The local media isn’t on the same page as the LSM.  Check a couple of questions he was asked in Colorado, here and here.

Denver’s News9 reporter Kyle Clark said in a Friday interview that Obama touted the “stimulus money going to Abound Solar” in a national address, but Abound Solar is “out of business and under criminal investigation” while the “jobs are gone and taxpayers are out about 60 million dollars.”

“How do you answer critics who see Abound Solar as Colorado’s Solyndra — a politically connected clean energy company that went under and took our money with it?,” Clark asked Obama.

Obama chuckled, saying only “four percent” of green-energy loans went to companies like Abound Solar and Solyndra. Since those decisions are made by the Department of Energy, he reasoned, “they have nothing to do with politics.”

Except this has been demonstrated as a lie.  The White House on more than one occasion intervened on behalf of their cronies to ensure money was release for these stupid fantasy schemes.

Pat Stryker, an Obama bundler who has donated, according to the Center For Responsive Politics, “$500,000 to Democrats over the last five years including $50,000 to President Obama’s inaugural fund and $35,800 to his victory fund in 2008,” was an original investor in Abound and visited the White House three times around the time the DOE loan was approved.

Abound subsequently filed for bankruptcy in June, and the government is refusing to release the company’s trade secrets for fear they will reveal the Abound’s solar panels were not up to par.

Then there was this question asked of Barry in Colorado……

Kyle Clark, a political reporter for Denver news station 9News, asked Obama, “Were the Americans under attack at the consulate in Benghazi Libya denied requests for help during that attack?”

Obama merely said, “nobody wants to find out more” about what happened than he does, and the administration was still gathering facts to “find out exactly what happened.” Earlier in the day, a report came out that revealed the Obama administration denied the urgent pleas for help from CIA agents in Libya during the attacks.

When Clark pressed Obama a second time, the President again punted, answering, “we are finding out exactly what happened.”

Obama protested, “the minute I found out what was happening, I gave three very clear directives,” the first of which was to “make sure that we are securing our personnel and doing whatever we need to.”

Obama won’t go back to Colorado if they let Kyle Clark ask him anymore questions.  So, we’re not sure he’s cancelling to watch the storm or cancelling because there’s no point in making the stops he had planned to make.

30 Responses to Obama Cancels Campaign Stops To Monitor Storm, But Not For Benghazi