Entitlement Children Hate That They Are Obama Supporters!!! 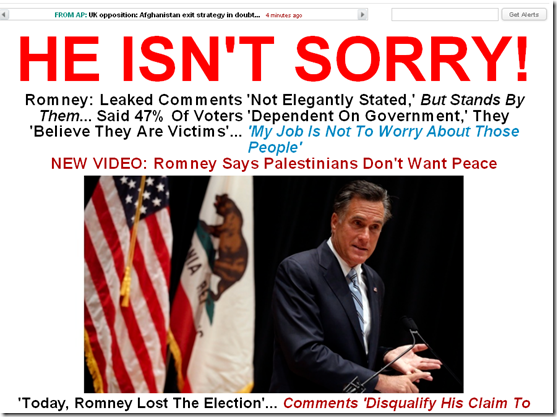 Republican Mitt Romney says a video clip in which he called nearly half of Americans “victims” was “not elegantly stated” and was “spoken off the cuff.” But he says President Barack Obama’s approach is “attractive to people who are not paying taxes.”

The Republican nominee did not disavow the comments but said they were made during a question-and-answer session. He said it was indicative of his campaign’s effort to “focus on the people in the middle.”

This is fascinating.  Someone sneaks a secret video of Romney and it catches him articulating the obvious.  Entitlement recipients are likely Obama supporters.  Of course, the left hates that thought.  But, this is exactly what this election is about.

The faux outrage of the left and their surrogate the LSM means that Romney has struck a chord which is likely to resonate with the freedom loving populace.

Personally, I give point for Romney on this one.  Unlike his opponent, Barack Hussein Obama,  it demonstrates that he deals with reality.  Expand and expound, Mitt.  This is your campaign!

102 Responses to Entitlement Children Hate That They Are Obama Supporters!!!