Given that the EPA is shutting down coal plants across the country, I thought I’d go over some implications, and review some things which may not be obvious to everyone.  The coal plants being shut down provide slightly less than 2% of our baseload capacity.  Baseload is the known amount of electricity which will be used at base demand.  That is to say under “normal” conditions.  So, what happens, is the operators of coal plants and nuke plants set their output and just let it go.  Now, during any given time, the demand may increase beyond the baseload, so the baseload must be supplemented.  We call this peak demand.  Natural gas is great for the function.  The reason is, the output is much quicker to respond to the necessary adjustments.  A good analogy would be the difference between a gas grill and a charcoal grill.

Sadly, very soon, we’ll have less baseload capacity.  This, in part, will be made up with additional power plants.  I’ve no doubt the loons wish and believe much of the coal energy will be supplanted by alternative green energy.  But, it can’t be.  Coal is baseload.  The “clean” energy isn’t reliable enough to be base load.  We’re not adding any nuclear to speak of.  And, neither are we adding any hydro.  So, and difference made up will be made up with gas fired generation.  But, what’s the big deal?  We’re finding more and more natural gas on a daily basis, and we’re getting it!  We are the world’s largest producer of natural gas and we’ll likely extend the lead in the coming years!

But, here’s the problem.  We’ve other uses for natural gas.  97% of the coal we get is used for electric generation.  It is also used a bit for steel manufacturing.  But natural gas?  Natural gas has many other uses;  cooking, heating, industrial, transportation all of which natural gas plays a huge role.  But, again what’s the big deal?  We’ve such an abundance of natural gas why not use it? 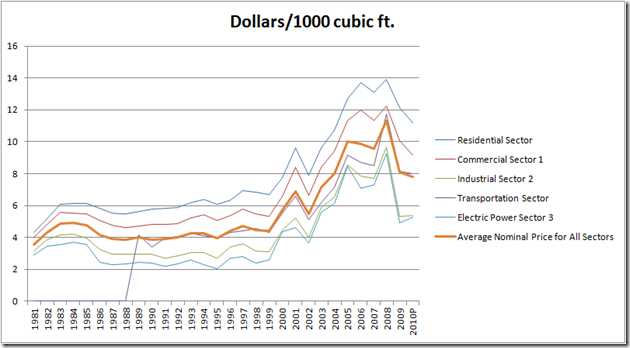 As you can see, in spite of dramatic increasing production, it has only been in the last couple of years which production has exceeded demand.  And, we’re seeing a leveling off of the price decrease, even though it is still more costly than what it was in 2003.  Much of the recent cost decrease was due to the recession.  Again, once the recession ends, the price of natural gas will take off again.  And the price increase will effect a much larger portion of our economy and society.  Already heating costs are too much.  We need our natural gas.  And we’re going to increase our need for it.  There’s no point to needlessly add to the demand in using for base load generation if we don’t have to.  And, we don’t.

This entry was posted in Economics, Energy. Bookmark the permalink.