Is that the BEST they can do?

Well, the BEST project is out of the gates and running strong!  They’ve already exposed themselves as being unscientific, but now they’re going for full stupid.

Apparently, they’ve got this video showing the earth’s historical temp coverage and the anomaly for that various particular times.  This is a BEST product.  You can watch the video here….. http://www.berkeleyearth.org/movies.php,  but I had better luck getting it to play here.  So, I screen shot a couple of particular points in time. 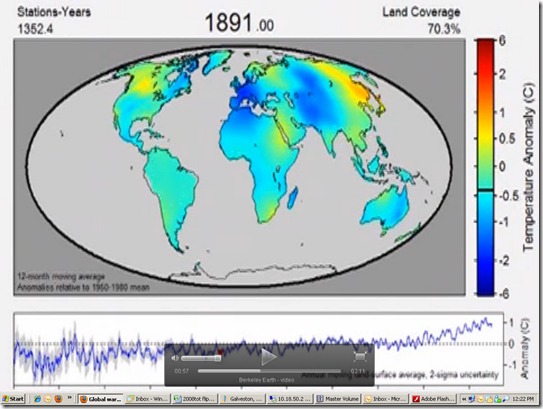 Uhmm, earth to Dr. Muller, ……… you moron.  You’re doing it even worse than GISS!  Do you honestly believe anyone is going to buy that BS?  Even alarmists are going to laugh at you.  And thanks to you, I’m being tortured by an old Air Supply song being stuck in my head!  Arrhhhggg!!!!

A couple notable quotes from Napoleon Bonaparte:   “Imagination rules the world.”  “The surest way to remain poor is to be honest.”

My thanks to MWhite, Gator, and Steve Goddard

31 Responses to Is that the BEST they can do?

Leave a Reply to oVER50 Cancel reply